Student groups aim to eliminate secret society from the campus through open confrontationand:Comment:  A 1950s-era movie and artifacts allegedly used in 2000 aren't the best evidence. The ideal would be knowing what Michigamua does today.

For my previous postings on the subject, see: 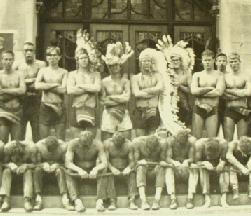