A history of Indian dogs

Pre-Columbian Tribal Dogs In The Americas 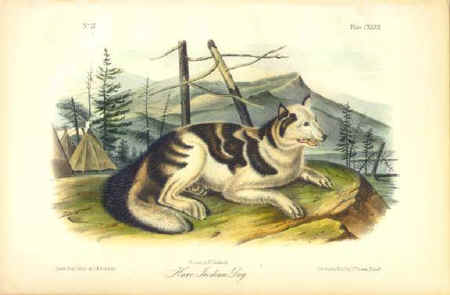 Email ThisBlogThis!Share to TwitterShare to FacebookShare to Pinterest
Labels: dogs

Indeed, as the article pointed out, there were strong suggestions that some of the earlier anecdotal recordings by early explorers(ie.g. Hayden, Drake, Brown, Maximillus, and Mathews) who studied the plains indians made note that some tribes such as the Crow, for example had numerous dogs that resembled the wolf. Or "wolf-like" dogs as described by (Hayden?) or others. Its possible that they were "Native American Indian dogs".

The Mexican Hairless or Xoloitzcuintle is the breed that became the Chihuahua. It's one of several breeds that pre-Columbian Indians kept, according to this article.

I don't think anyone claimed that Chihuahuas were the only breed kept by Indians. But they were one of the prominent ones, especially in Mesoamerica.

Anongeno: Why the attack? The Chihuahua-like reference was actually from very old photos I saw in a book about the history of actual Native American dogs.

The dogs I saw photos of were not chihuahuas, but had a definite facial resemblance.

And I can't find Rob attacking my "frivolous" claims in his post about Native American Indian dogs. Yet you claim to have seen this. Actually, I provided some source material and direction for Rob's second post on the issue of Native Americans' dogs.

I think a lot of it is that Indians clearly valued genetic diversity. (Exhibit A: The SEVERE incest taboos.) Hence the fact that the dogs look so much like wolves.

True, Anon. I recall one tribe that shunned a band of Natives for marrying relatives that were too close (the Keoxa).