Last gasps of the Class of '94

Frank Rich again uses the Sotomayor hearings to explain how and why conservatives have lost the culture wars:

They Got Some ’Splainin’ to Do

By Frank RichAnd:Comment:  Again, the details presented here--nonwhites portrayed as "the Other," the "whiny refrain of white victimization"--apply to Indians as well as blacks and Latinos. Especially when there's money at stake, as in the battles over Indian gaming.

Before DMarks says something about Bill Clinton's pecadilloes, let's point out the obvious. The issue here is hypocrisy, not morality. This is about the liars and cheaters who claimed the moral high ground when they were no better than anyone else. Bill Clinton never proclaimed his moral superiority to others. The Republican hypocrites of 1994 did.

For more on the subject, see The Enemy Within.

Below:  Newt Gingrich "renewing America" by cheating on his wife. 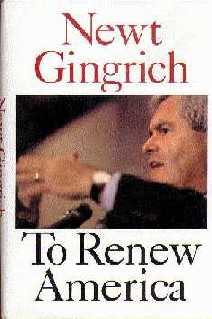 Actually, I was going to comment about how the casino lobbying scandal was bipartisan, with Democrats receiving some of the most donations.

Rich, who is writing a partisan essay (chock full of value judgements that are derived from which party someone is in), would not be one to point that out.

And Rich lets by some whoppers in the hopes that no one would check them out. Most of the "class of 94" "Contract With America" was adopted, with some it even adopted by Democrats. That's success on most counts.

"That’s the crux of the ’94 spirit, even more than its constant, whiny refrain of white victimization:"

Yet another whopper. Rich injects race into a situation where race had nothing to do with anything.

And Rich is not above getting racist when it suits his purpose, as when he slams Steele as a "token" black.

All in all, not an enlightening column. It tells us less "what is what" than it tells us "what the Democratic Party" thinks.

Columnists like this have little depth, and come across like they are writing campaign ads. Democrat Good, Repubican Evil. It's really a lot like what Rush Limbaugh does.

There are plenty of columnists on the Left who are much much better than this. Such as E.J. Dionne and Leonard Pitts. Intellectuals who go beyond making up stuff to score points for their party.

Stephen said...
This comment has been removed by a blog administrator.
10:45 PM

Stephen said...
This comment has been removed by a blog administrator.
11:02 PM

Stephen said...
This comment has been removed by a blog administrator.
11:02 PM

Stephen said...
This comment has been removed by a blog administrator.
11:15 PM

The Contract with America was a mixed success at best, DMarks.

Whatever the role of the Contract, Republicans were elected to a majority of both houses of Congress for the first time since 1953, and several parts of the Contract were enacted. Some elements did not pass in Congress, while others were vetoed by, or substantially altered in negotiations with President Bill Clinton, who would later sarcastically refer to it as the "Contract on America."

A November 13, 2000 article by Edward H. Crane, president of the libertarian Cato Institute, stated, "... the combined budgets of the 95 major programs that the Contract with America promised to eliminate have increased by 13%."

Although the Contract didn't address overt "values" issues such as abortion and school prayer, many of its provisions aimed to help whites at the expense of minorities.

* "An anti-crime package": Being "tough" on blue-collar crime while ignoring white-collar crime is classic conservative-speak for protecting whites from minorities.

* "Discourage illegitimacy and teen pregnancy": The conservative version of "personal responsibility" is to blame minority victims for being victims.

* "Reasonable limits on punitive damages and reform of product liability laws": In other words, protect mostly white-owned businesses from lawsuits by workers, minorities, and others.

What's most noticeable in the Contract on America is the lack of provisions for helping America's poor. An accurate title for it would be "Contract to Protect the Upper and Middle Classes at the Expense of the Lower Classes." Therefore, Frank Rich correctly characterized it as part of the Class of 1994's "white victimization" mentality.

Rich's justification for calling Steele a "token" is "there’s been no black Republican elected to either chamber of Congress since." Appointing a black party chairman when you haven't elected a black Congressperson in 15 years sounds like a textbook definition of "token" to me.

As for the Abramoff scandal, you're way off the mark. Republicans conducted the corrupt lobbying and were the primary beneficiaries of this lobbying.

The monetary influence of Jack Abramoff ran deep in Washington, as Jack Abramoff spent millions of dollars to influence and entertain Republican politicians. Abramoff had a reputation for largesse considered exceptional even by Washington standards. In addition to offering many Republican members of Congress expensive free meals at his restaurant, Signatures, Abramoff maintained four skyboxes at major sports arenas for political entertaining at a cost of over $1 million a year. Abramoff hosted many fundraisers at these skyboxes including events for Republican politicians publicly opposed to gambling, such as John Doolittle. Abramoff gave over $260,000 in personal contributions to Republican candidates, politicians, and organizations, and funded numerous trips for politicians and staffers, including both Republicans and Democrats. An estimated two thirds of Ambramoff's direct contributions went to Republican congressmen, and one third to Democratic congressional leaders.

Of the approximately $85 million in tribal money entrusted to Abramoff, his employers, or his related organizations, over $4.4 million since 1999 were directed to at least 250 members of Congress, primarily Republicans in leadership positions or on relevant committees, and Democrats with standing connections to Native American interests.

Stephen our resident Islamophobe posted a bunch of crazed comments on Sarah Palin, Tim McVeigh, 9/11, Islam, and the Crusades. If these topics don't seem relevant to this posting...you're right, they're not. They have nothing to with the Class of '94.

You can post your Palin comments on the Palin posting in question, Stephen. As for your other comments, I hope you didn't spend too many hours compiling and writing them. What a colossal waste of (your) time.

I told you repeatedly you weren't going to hijack my blog with your worthless rants and raves. Clearly you were too dense to understand what I meant, but now you know. This wasn't even a close call; your lengthy rants were about as far off-topic as they could be.

You can save your comments for the next time they actually apply to something I've posted. Or you can e-mail them to me and I'll try to answer them. Hint: Shorter messages are better. Try sending one or two points at a time rather than your fanatical 15-20.

What you can't and won't do is use my blog in your feeble and fruitless attempts to prove your superiority. Start your own blog if that's your mission in life. Again, I won't tolerate your personal attacks here.

P.S. Learn what a generalization is before you waste any more of my time criticizing my generalizations. Your continued stupidity on this matter is nothing short of appalling.

In regards to the casino donations, I am referring to campaign donations from the same organizations that went to Democrats in large amounts, but did not actually involve Abramoff. Better-laundered donations er bribes er whatever.

I used Wikipedia's article for my assessment that the "Contract With America" was pretty successful. The same article you read to say that it was not so successful.

I think this type of thing is a good idea. Not speaking from an ideological standpoint, but defending the idea of a group/party/candidate explicitly laying out a list of promises like this.

In regards to the racial take on some of the elements:

By the 1990s, there were a record number of middle-class Black families. Newly middle class. Perhaps more fragile, and more likely to be whomped back down into poverty as a result of overtaxation. These too are defended if you defend the middle class.

Losses to frivolous lawsuits degrade services and increase prices. Price hikes affect the poor more than the non-poor, so this is one way the poor (including minorities) benefit from tort reform.

These are common themes from African-American community leaders, speaking to their own community. But truth be told these "problems" are major problems with whites too.

I see some of your your point on "token", but anyone labelled thusly is often done so in an attempt to get them judged not by the content of their character, but by the color of their skin. The result is a mild racist tinge on matters that is applied to blacks a lot, but hardly ever to whites.

The Crusades.... and Sarah Palin? Were the removed comments that anachronistic? Wow.

1) According to this interesting page, half of Blacks are now middle class. That's a large proportion of blacks who benefit from middle class tax cuts. Of course, this was a small percentage during the 1990s, but it was still high, and not easily swept under the rug. The site also refers to "many whites have this picture of blacks as being mainly poor". Perhaps that is a negative stereotype?

Note: "The black middle class was small until the 1960s. After that it started to grow. By the 1980s it had come into its own:"

"posted a bunch of crazed comments on Sarah Palin, Tim McVeigh, 9/11, Islam, and the Crusades. If these topics don't seem relevant to this posting...you're right, they're not. They have nothing to with the Class of '94."

They came from the 'enemy within' section you linked to at the bottom of this post, if the link hadn't been there I wouldn't have mentioned it.

"You can post your Palin comments on the Palin posting in question, Stephen. As for your other comments, I hope you didn't spend too many hours compiling and writing them. What a colossal waste of (your) time."

Actually it took me about five minutes.

"I told you repeatedly you weren't going to hijack my blog with your worthless rants and raves."

Once again I was criticizing the 'enemy within' link at the bottom of this post, if that link hadn't been there I wouldn't have brought all that up.

"Clearly you were too dense to understand what I meant, but now you know. This wasn't even a close call; your lengthy rants were about as far off-topic as they could be."

"What you can't and won't do is use my blog in your feeble and fruitless attempts to prove your superiority."

Oh the irony, this coming from the guy who has to bang about how much of erudite he thinks he is and how Americans are 'ignorant'.

"Start your own blog if that's your mission in life. Again, I won't tolerate your personal attacks here."

Oh that's rich coming from the guy who repeatedly insulted me.

"Your continued stupidity on this matter is nothing short of appalling."

Ummm you thought that CAIR was a reliable source of info, talk about stupidity.