Filming A Year in Mooring

"A Year in Mooring" Movie Filming in Traverse City

He doesn't think he saw Eyre unless Eyre was the guy in the pale green jacket: 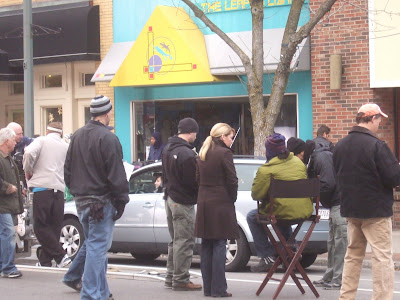 Nobody seems to know much about A Year in Mooring (2011), but apparently it's a mainstream rather than Native film.

The movie's lead actor, Josh Lucas, isn't Native but has an interesting Native connection:Note:  Arkansas doesn't have any federally recognized tribes. But the reservation mentioned could be in another state. Or it could be the "reservation" of an unrecognized Arkansas tribe.

DMarks notes that screenwriter Peter Vanderwall also wrote Shadowheart, a Native-themed movie. Is this a coincidence, or are Chris Eyre and the other filmmakers seeking people with a Native connection?

For more on the subject, see Catching Up with Chris Eyre and The Best Indian Movies.
Posted by Rob at 9:40 AM