Sting and Indians vs. hydroelectric dam

By Gary DuffyComment:  For more on the subject, see Sting Shows Support for Kayapo People.

Below:  "Sting joined up with Chief Raoni for the second time." 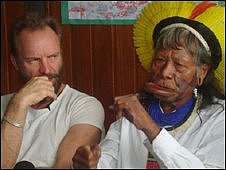