By Lee BensonNaturally, some commenters took umbrage with this article:Comment:  The article didn't include examples of Nine Mile Canyon's rock art, but it's probably similar to the Newspaper Rock petroglyphs at the top of this blog.

The Indians who created the rock art may not have considered it sacred or even artful--but since we'll never know, it's stupid to speculate about it. If today's Indians consider it important, that's enough of a reason to preserve it.

Benson has set up a false dichotomy: The rock art is either great art or worthless graffiti. It's quite possible the truth is somewhere in-between. The rock art is clearly a form of communication and it may include important cultural or historical markers.

If we had a whole library of such markers, it might not be so critical to protect this rock art. But since we have only a tiny fraction of these people's heritage left, it's vital to preserve every bit of it.

And to answer Benson's charge directly: If scrawled graffiti was all we had left of Western civilization after it disappeared, I'd say it would be vital to preserve that too. The same would be true of any messages from a lost or little-known people. Save 'em all.

For more on the subject, see Rock Art Inspires Nevada Artists and Rock Art in the 'Burbs.

Below:  Another example of rock art (not from Nine Mile Canyon). 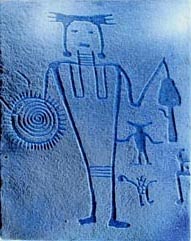