By Rob CapricciosoComment:  I don't cover every Native death because they aren't significant in the popular culture. But I'd say Mankiller's death is.

Mankiller was a perfect example of a modern Native American. She wasn't a Plains chief, warrior, or princess. She didn't dress in feathers and leathers. She didn't look like Pocahontas or the Land O' Lakes maiden. Her career was a fitting rebuke to people who think of Indians only in stereotypical terms.

For more on the subject, see Wilma Mankiller's Inspirations and Native Women Advocates. 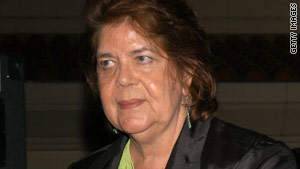 Is this the same one who sided with John "Corntassel" Smith against the inclusion of Cherokee freedmen in the Cherokee nation?

Are you talking about Cherokee Chief Chad Smith? I don't know any Cherokee named John Smith.

I gather Mankiller acted against the Freedmen when she was in office in 1984. But her views might have changed since then.

The Freedmen issue is complicated, of course. There's no clear right or wrong position, though I tend to favor the Freedmen's side.

Wilma Mankiller followed up to cement the ousting of Cherokee Freedmen when she and her council adopted legislation defining Cherokee Citizenship on having a Certificate of Degree in Indian Blood, thus legislatively booting the Freedmen from the tribe.

The unfortunate Freedmen decision does not detract from the fact that Chief Mankiller was a remarkable person. And, as you pointed, out a living rebuke to people who cannot get past the 'buckskins and feathers' image of Indians.