Indianz.com summarizes a rant that's been circulating around Indian country the last couple of days:

University student newspaper ridicules powwow, participantsComment:  You can read the text of the article below or here.

The photo is of actor and powwow dancer Saginaw Grant, of course.

I'm not up on powwow traditions, but I suspect it's customary to toss donations on the ground. I'm confident people aren't doing it because they're lazy or thoughtless, as writer Noah Kelly implies.

Kelly also makes fun of Indian tacos--blaming the Indians because he's too ignorant to Google the subject--and frybread, which is basically the same thing. News flash: Indians and non-Indians both eat fried food and they're both overweight. Stop the presses!

This screed is an example of the "good for nothing" stereotype--i.e., Indians as shiftless or mercenary bums. It's a variation on the savage and uncivilized stereotypes. As usual, the goal is to put Indians down because they're not white Christian Americans like "real people."

For more on these stereotypes, see Fischer:  Natives Had No Morals and 19th-Century Cartoons About Indians. 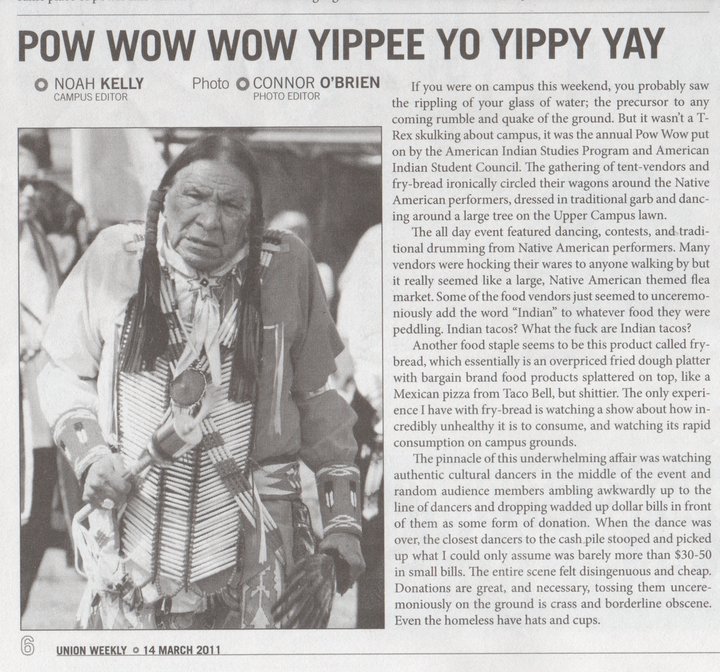 The editor sounds like he's never been to a pow wow, and perhaps had some unrealistic expectations.

I've only been to a few, and I look forward to checking out the vendors, and yes, the fry bread...

By the way Rob, I've been reading your blog for a while, and I like it a lot. Keep up the good work!

I've always been under the impression that one was supposed to check their facts before posting anything publicly. Guess I was wrong. Huh.

Too bad he wasn't open-minded enough to enjoy the experience.

makes me so mad. if he doesn't know anything about a powwow and the culture then he should have never tried to report on it. such a jerk!!

To the Union Weekly Editor,

The article titled “Pow Wow Wow Yippee Yo Yippy Yay” in your March 14, 2011, edition of the Union Weekly was a horrible choice for a headline as well as being very disrespectful in content towards Native Americans.

Your paper and reporter owe the Native American communities and the student group who held the powwow an apology for this article that shows a complete lack of understanding of the event they were attending. Did the reporter ask what the event was for? What does it mean to the Native People attending? The use of words to describe Native American attire is not garb; it is regalia, or traditional dress. Also, again if your reporter had asked about why people were putting down money for the dancers was not to pay them for dancing. If this article was merely mocking the powwow, again, Native Peoples are not things for your entertainment. There is a reason they held this event.

Tsk tsk. It's people that...That need a more open mind. He shouldn't even be working on the paper. Take it from this native. Theres a lot i don't understand about non native society.But i try to understand it. After all. Your neighbors. I don't understand a lot of actions but i try to see the light behind it. And whatever it means for the person.

Very disappointing racist and uneducated view point. The Pow Wow is a celebration for our people, a time to gather, love, laugh and reconnect with each other. There are many reasons for the different dances etc. at the pow wow and maybe had the writer read simple Pow Wow etiquette before hand this may have assisted with his ignorance. This Pow Wow, celebration was obviously open so anyone could attend....open your mind before slamming another culture.... better yet you should have left at your first sense of dislike. I am amazed that this article was printed.....unbelievable!

your an idiot for writing that story like that!!

normally at all the pow wows ive been to there is a blanket laid down on the ground for donations, and that is where you place your money

Cannot believe that stupidity that still exists today! How can someone judge and critisize something that he doesnt understand and then for the paper to release it. I agree w they owe alot of people an apology!!

I find the ignorance of people just appalling at times. And this is one of them. This reporter obviously didn't stop any number of my good friends who attend that powwow and ask about anything he saw going on. In fact, had he/she bought a program, most of the things he saw would have been explained to him. Powwows have been our way of gathering tribes together for social events and for young people to meet someone out of their own tribe....less chance of interbeeding. It's ignorant people like this reporter writing things as the truth that has prolonged the stereo types.

Doesn't say much for Californians, i remember Gov. Swartzanagger saying i'm going to get those Indians (Casinoes). Makes all people "from" this state look very ungreatful. Maybe we should have feed only the greatful that first winter!

what a big ASS

Well after reading this I was agitated. The fact that we were compared to homeless pisses me off. This statement"Weekly editor Noah Kelly described the event as an "underwhelming affair" that resembled a "flea market" and said its participants acted worse than homeless people." Show how ignorant this editor is. If I was to describe things as she when it came to her culture it would be something like this," To watch the distasteful examples of selfishness and money grubbing Wannabes who think they are better then the rest. And they know it all" Their editor maybe you might want to write a retraction and apology to all of the entire native culture!! Or we should make this so public that it would ruin your entire corer. How is that for your comparison?? Maybe your not a very good editor either, because you would have known better then to write something so distasteful and damaging.

Keep us posted Rob, I hope that the author of the article and the paper itself are taken to task on their racism.

Sure is absolutely nothing like the pow-wows I've been to.

I suppose there might be some shabby pow-wows being held somewhere, but that's no excuse to let fly with such a racist screed as this.

There's no saving graces in this article.. .but at least the writer did not call the traditional dress "costumes".

That is the most hurtful and racist thing I have ever heard!!! Its outragous that my fellow Natives over in California have to open up their weekly student paper and read such hurtful words!!! Its people like Kelly who just don't understand and give a crap about history and what our people had gone through. I cried when I read this ridiculous column of some guy who don't respect himself or others. Someone needs to take action and I hope my fellow Natives at California State are taking that action. Kelly should be suspended from the paper at the least but I think from school as well!!! His voice is heard by many and he does not set a good example for California State University!!! The people who reviewed it as well!!! Someone had to of read this and let it go through!!! Why would California State let this Kelly post this in a weekly newspaper seen by all the students on Campus!!! If I was a student at California State I would be completely embarrassed and hurt!!! Its like making fun of Mexicans for having Cinco De Mayo or even disrespecting the victims of 9/11!!! Think about it and look into your heart NOAH KELLY!!!

If you don't like it, don't go.... You don't have to publish it to the world to see... I remember your name, better watch it you ignorant fuck... Have some respect dick head...

The Union Weekly, a student newspaper at California State University, Long Beach, will issue an apology for an article that ridiculed a powwow and its participants.

On Sunday, the American Indian Student Council met with Kevin O'Brien, the editor-in-chief of the paper and Noah Kelly, the writer of the article. Kelly apologized to Indian students during the meeting, AISC said on its website.

A written apology and an explanation has been published in this week's issue of the paper, which was released on campus today. AISC said the issue also includes letters to the editor about the offending article.

thanks for the update Rob
given the nature of the article, an apology doesn't seem to cut.
Are the editor and author undertaking any measures to ensure it doesn't happen again and to educate themselves in such matters.... am I cynical for doubting it?

"Kelly" sounds shallow, ignorant, and racist. He knows nothing about American Indians, nor does he deserve to. Too bad he's allowed to write about them for publishing. This guy goes to college?

It's people like Kelly who would have us homeless -- and have had us homeless. Check out the initial reservation purpose. Hitler got the idea for concentration camps from it. -- The one called Kelly has a complete lack of spirituality. Stay as far away from him as possible. He's a proud decendent of those who committed a genocide.
Is there no one at this little paper who checks the contents before publishing?

Are any white people offended by this Kelly guy's article? Or are Californians that racist? We know some are -- come on people, speak up. Is Kelly just a home grown racist, or is he in the kkk, the aryan brotherhood, skinheads, or the likes? Kelly's article is unbelievable, disgusting, insensitive, brutal, immature, racist, unspeakable, irritating, agitating, and bordering on criminal.

It's always seemed and been curiously interesting to me that the dominant culture doesn't have to develop any sensitivity if they don't want to and apparently some just don't have it in their make up or values to do so.

It's all about you big guy.

Thanks for the update, Rob. I'll be curious to see the wording of said apology.

He really knew how to upset the Native Nations, which may have been his plan to begin with. & Though he does have the right to say what he likes, he only makes himself look uneducated here.
Yes, powwows have dancers & yes, there will be vendors because they are invited! But by disrespectfully bashing them shows he has no better education of Indian people! lol. The Indians have been bashed on for years & all he could come up with was "what is an indian taco"?
My advise to him... try one! ;)
I have been attending powwows since childhood &understand that he may be a little jealous that our people get together & enjoy ourselves once in a while. & yes, I was offended upon reading this, but only for a moment.Do I feel he should be allowed to publish more articles like this, definitly not. Whose next?
I guess all I am saying is, racism is contagious. He says something bad towards us, we say something back & so on. Hope he's happy or at least learns something from this.

In Why Write from Indigenous Viewpoint? someone took me to task for not acknowledging all the Native viewpoints posted here. Really? Okay, thanks for sharing your views, Natives. I appreciate it!