Indians in A Taste of Louisiana

I came across this series on PBS a few months ago. The first three episodes featured Native Americans.

Taste of Louisiana with Chef John Folse & Co.: Our Food HeritageComment:  Chef John Folse is so relentlessly upbeat that he almost sounds insincere. But I must give him credit for doing his shows right. Even though they're cooking shows, he spends the first 10 minutes of the half-hour learning about and sharing Native cultures. Back in the studio, he has a couple of Native guests who answer questions or perform songs.

The message is one of continuity. Not only did Natives produce great civilizations, but their descendants are still with us. These cultures aren't dead, they're a vibrant part of the American tapestry.

Anyway, the shows are good, but they're mainly about cooking, not Natives. If you want to see them, you can buy the DVD here:

For another documentary about Native food, see Preview of Growing Native. 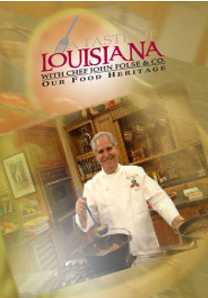