Wamapoke curse in Parks and Recreation

The TV show Parks and Recreation has stereotyped Indians before. In last week's episode, titled Harvest Festival (airdate: 3/17/11), a "Wamapoke Indian" finally appears on-screen. The town of Pawnee is about to hold its Harvest Festival and the local Indians aren't happy.

Of course, there are no federally recognized tribes or tribal casinos in Indiana. Tecumseh's Shawnee tribe and others were forced out after the War of 1812. But let's pretend the fictitious Wamapoke tribe exists.

You can see the whole episode here:

But here's a synopsis with my comments:

She, Ben, and Tom discuss the nerdiness vs. non-nerdiness of Star Wars (Tom and Leslie: nerdy; Ben: not-nerdy) while they wait for Ken, the leader of the Wamapoke tribe, who is sporting a slicked-back ponytail, a bolo tie and a festival-related grievance. Tom gets in a “Dope bolo” before Leslie addresses Ken in his native language. But this does little to assuage Ken’s grievance: the “carnival” is being held on the site of the Battle of Indian Hill, and its shooting galleries and fried dough stands need to be moved.That Pawnee would hold a festival on a historic battlefield is hard to believe. Battlefields are treated as "hallowed ground" almost everywhere in the US. Moreover, the battleground is a potential tourist attraction for the cash-strapped town. The smart move would be to hold the festival near the battleground and urge people to see both.

The Wamapokes supposedly lost the battle because they didn't have any weapons, which is a bit insulting. Describing them as hapless children isn't much better than describing them as savage killers. Actually, as Allan W. Eckert's A Sorrow in Our Heart makes clear, Indiana's Indians were sophisticated defenders of their rights and cultures.

The Indian's name is Ken Hotate, is which is better than Brave Eagle or Running Bear. But "hotate" is a Japanese name for plain scallops, not an Indian word.

Clearly Hotate has invented the "curse" to achieve his political goals. The idea that an Indian would place a curse in 2011 is silly. It would be like accusing someone of being a witch--a practice that died out centuries ago. But it's also silly that most of the townspeople believe him. The joke is primarily on them, not on him.

Things start to go wrong the day before the festival:

The TV news presents a CGI recreation of the meeting in which Hotate announced the curse. The video shows him grunting and dancing like a gorilla while a drum plays in the background. Ghosts fly about and Leslie's CGI head turns into a glowing skull.

That seems offensive to me. Even in this fictional context, it shows non-Indians conveying their stereotypical beliefs about how Indians act. In the real world, people would condemn this as a racist depiction of Indian spirituality.

Hotate wanted the whole carnival moved and Leslie says she's moved the shooting gallery. It doesn't seem to be enough, which may explain why Hotate isn't around.

For starters, the show has never mentioned that some Wamapokes survived. It definitely hasn't mentioned that there's a Wamapoke Casino in Pawnee. The casino doesn't fit with some of the previous claims made: that the town is broke, that its biggest attraction is a giant turnip or whatever, etc. A cash cow like a casino would be a major factor in the government operations of a town like Pawnee. See the Agua Caliente Casino Resort Spa in Palm Springs or the Chumash Casino in Santa Ynez for examples.

To obtain the generator, Leslie offers to "put the Wamapoke history exhibit inside the carnival grounds, right past the entrance turnstyle, so that you have to look at it before you start having fun." Funny, but the white folks still haven't addressed the Wamapokes' demands. Except for the shooting gallery, the bulk of the carnival still sits on the burial ground.

Clearly no one is taking the Indians' spirituality seriously. Not even Hotate, who finds Leslie's offer "interesting" and agrees to lift the curse. It's as everyone knows the white man's wishes trump the Indians', and all that matters is how to pay off a special interest group.

In the Wamapoke "ceremony," Hotate's Native song is subtitled in English. "I am not saying anything," he intones. "No one can understand me anyway. Doobee. Doobee. Do." Even though Hotate's actions are a spoof--he's lifting the "curse" he made up--this is really a slam against Native ceremonies. "We" don't understand what "they" mean, so perhaps the Indians are babbling nonsense. Perhaps their religious beliefs and ceremonies are nothing more than stunts to impress gullible non-Indians.

Joss speaks about his role

Whoops. Once the muckraking host of a  local newsmagazine (Mo Collins) gets wind of this development, it quickly explodes into a huge story.

What a great role for Joss, marked by lots of fun, hilarity--even snappy clothes.

"I got to wear a suit," Joss said. He also spouts choice lines. For example: "There are two things I know about white people. They love Matchbox Twenty, and they're terrified of curses."

Joss said he was thrilled to work again with executive producer Greg Daniels, who co-created King of the Hill "And I really liked that they put so much thought into my story line," he said, adding the show was careful not to offend Native Americans. When his character performs an over-the-top ceremonial bit, for instance, the prop master brought over a bag to sprinkle over the crowd and "took care not use any actual ceremonial ingredients."

The producers may have been "careful not to offend Native Americans," but they could've done more. There were a few things Indians might find offensive.

Despite these criticisms, the episode is decent overall. The details--particularly the depictions of Indian ceremonies--are stereotypical, but the main points are solid. The producers cast an Indian to play an Indian. He's wearing a suit and tie, not some sort of costume. He has a normal name, not a funny Indian name.

Other than the phony curse, he doesn't offer any "wise" or "mystical" nonsense. He pulls the wool over the white man's eyes, but not in a "shifty casino owner" kind of way. Nothing about him suggests he's savage, uncivilized, or anything but a solid businessman and community leader. 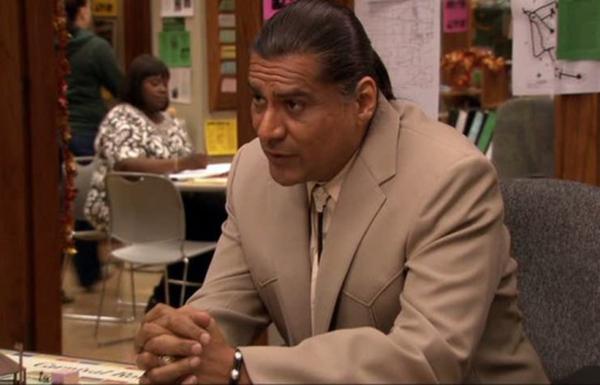 Email ThisBlogThis!Share to TwitterShare to FacebookShare to Pinterest
Labels: burial grounds, Parks and Recreation, Stereotype of the Month, stereotypes, TV

I read it all as satire. Pawnee serves to comment on American society. Things like, gotcha news shows (the subtitle under Leslie's name when she's on the Joan Calmezzo show after releasing her book and we find out that she was born in Eagleton, reads "Immigrant"), uneducated beliefs (like the comment that people wouldn't get flu shots because there was a rumor that said it turns you European), and the fact that in Pawnee a magician came to town in the 70s and when he pulled a rabbit out of his hat they burned him as a witch. The history of Pawnee and the Wamapoke is satirical. How could you make fun of white people's attitude towards Native Americans without calling out curses, and casinos. Those are stereotypes that exist and in this show we see people that we are laughing at buy into those stereotypes.

As I've written several times, a "satire" can subvert or support Native stereotypes. So we're talking about two separate issues: whether a work is satirical and whether it's stereotypical. It can be one or the other or both.

For some discussions of this point, see: