Land theft in My Little Pony

Educator Debbie Reese summarizes Over a Barrel, a recent episode of My Little Pony: 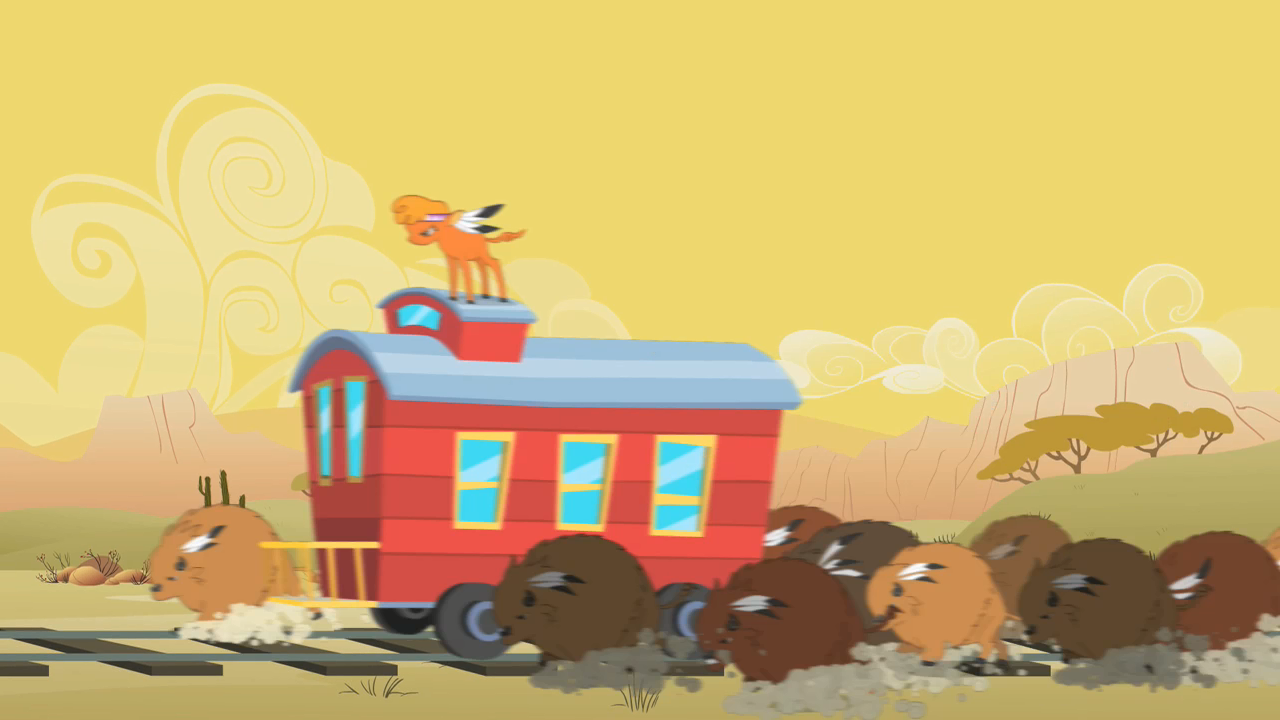 Comment:  The buffaloes in this cartoon aren't just analogues for Indians. They wear headdresses and feathers and live in tipis. They're "Indian" buffaloes.

The key moment comes when the buffaloes and ponies reach an impasse. "The buffalo had it first." "The settler ponies need it to live." And then the faux voice of "reason": "Look, both the settlers and the buffalo have good reasons to use this land."

Uh, wrong. The settlers don't need the land, they want it. They don't need to live in buffalo territory, they want to. They could pack up and go home whenever they choose.

So the show creates a false equivalence. Owning the land is no more significant than wanting to own the land. It's as if a criminal and his victim are debating which one is right. And the criminal gets what he wants because, well, he's American and civilized and represents the white man.

The story and its message aren't the only problems. The buffaloes themselves are stereotypical. They have tiny eyes and big blunt foreheads. They snort, paw the ground, and butt heads. The chief speaks in a gruff voice. In short, they're more animalistic than the human-like ponies.

Moreover, their "culture" consists of nothing more than stampeding and sitting around a campfire. They decorate themselves with feathers and warpaint, and live in tipis. They're primitive compared to the ponies, who have managed to build towns and railroads despite not having hands.

Then there's the setting: the "wild" West. Never mind that desert, mesas, and cacti are found in the Southwest, while buffalo, headdresses, and tipis were found in the Plains--two distinct geographic regions. That's the least of the problems.

The barren wilderness is a common trope in movies, TV shows, and cartoons. It alone tells you the whole story. Ponies equal civilization. Buffaloes are outside of and separate from civilization. Their existence is as alien as the landscape they inhabit.

This provides a built-in excuse for any show's lack of attention to Natives and Native issues. "They're just so remote. They've chosen to live a primitive lifestyle far from prying eyes. It's not our fault for never mentioning them until now; it's theirs.

"Since they've spurned modern life with its technology--electricity, plumbing, machinery, etc.--it's also their fault for being poor and backward. Why can't they give up their animal-like existence and become civilized people? We invited them to assimilate and become Americans like us. But like stubborn, willful children, they refused to." 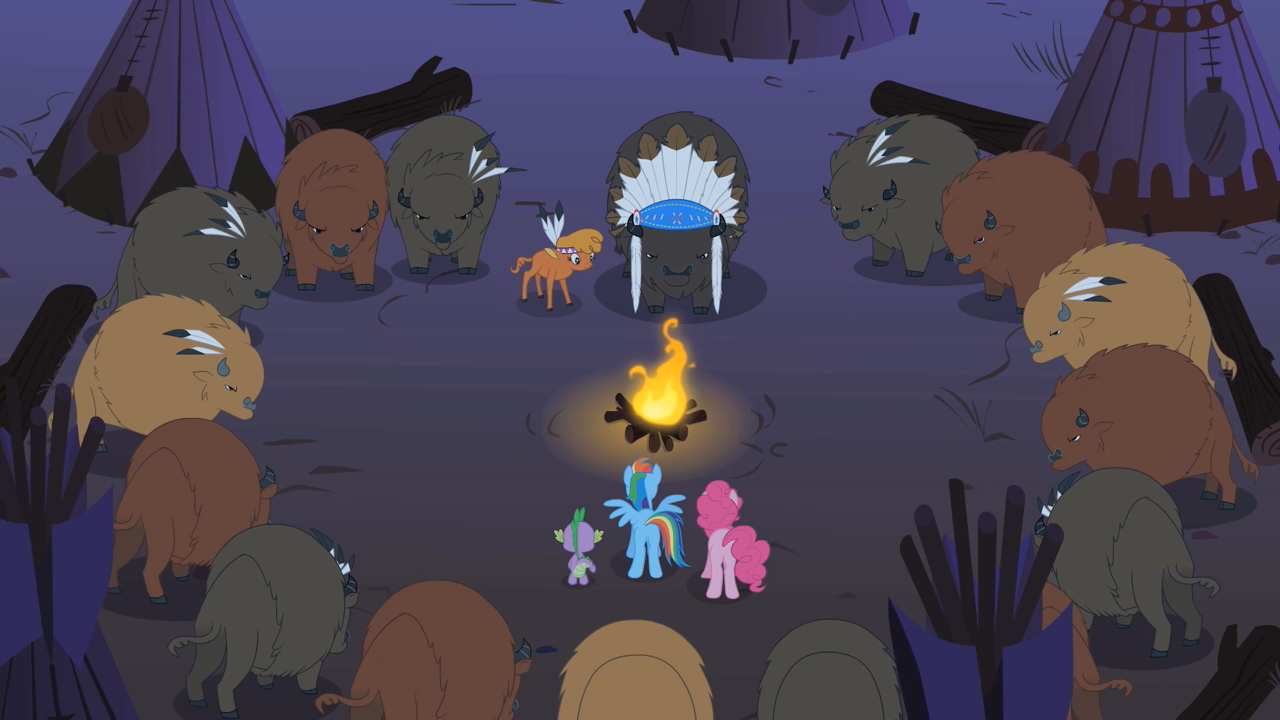 As the crisis escalates, the buffalo stampede the town. They've got no solutions except a brute-force attack. But the ponies are too smart for them. They throw pies in the buffaloes' faces, blinding them and causing them to crash.

A smart approach for the buffaloes would've been to use their fire to burn down the town. But these buffaloes aren't that clever. In fact, they can barely argue their case. Rainbow Dash the pony argues it for them.

The show pitches the ending as a compromise that satisfies both sides. In reality, the ponies keep their ill-gotten gains without giving up anything significant. The buffaloes give up their cherished land for something of lesser value they don't necessarily want. It's a good deal only if you think fruit is more valuable than real estate.

No excuses in the 21st century

Let's reiterate that this episode aired in 2011. Except for the pie-throwing climax, this story could've easily appeared half a century ago. Let's review:

Cowboys and Indians in the wild West. Good people on both sides--except perhaps a few bad apples. A genuine dispute or a misunderstanding causes tensions to flare. Indians threaten to go on the warpath.

Fortunately, a white savior intervenes, finding a compromise that "satisfies" everyone. This usually means the settlers get to keep the stolen land and the Indians get to "live in peace." It basically ratifies the status quo.

The message is that the settlers did nothing wrong. That America is great for finding solutions where everyone can live in harmony. It's the home of the free, the land of opportunity. The shining light of civilization!

White folks are so kind and generous that they can share their land with their brown-skinned neighbors. You know, the ones who "stick to their own kind," living just out of sight in ghettos or barrios or reservations. Someday, maybe, these outsiders will join the mainstream and become real white Americans just like us. Until then, we'll make colorful cartoons about their strange and exotic ways.

For more on the subject, see Indians in Porky Pig Show #3 and Tom and Jerry in Two Little Indians. Of course, these cartoons were done half a century ago. What's the excuse for My Little Pony's apologies for Euro-American aggression? 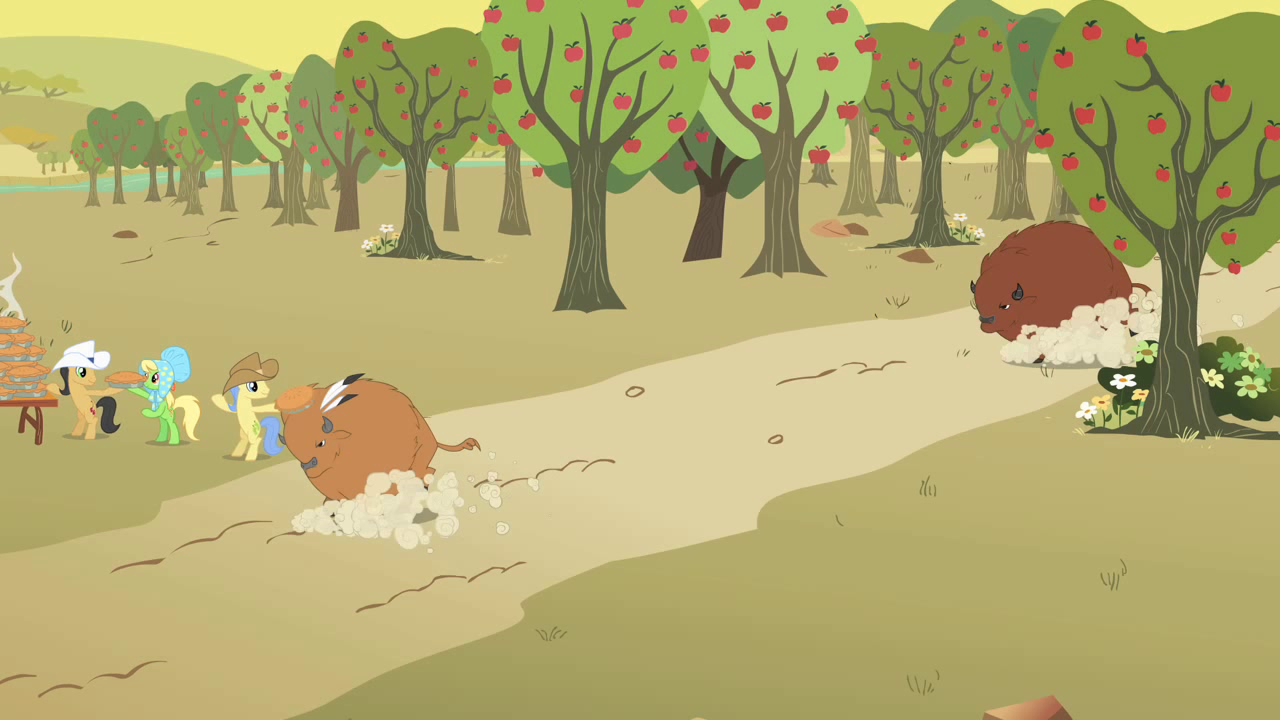 God, no wonder I'm convinced cute is evil. As if Drawn Together, wherein Strawberry Shortcake lookalikes were guilty of ethnic cleansing, didn't spell it out.

Of course, it becomes "Can't we all just get along?" We can, so long as you aren't squatting on my land and claiming it for your own.

"They settle the dispute. The ponies keep the orchard and land. In return, the buffaloes get apple pies and apples."

And to make it more real, and to be similar to the situation that led to the 1862 Sioux Uprising, the buffaloes get promised apple pies and apples, but instead get some crumpled pie tins with crumbs, and some wormy apple cores.

In addition to the specific fail the episode represents, there is just the general implication that the ponies may *appear* to be all the colors of the rainbow, but really, they're white. Whitewhitewhite. Maybe they can do other "special" episodes where they meet other races in the forms of animals that the company isn't gonna make toys of, thus making absolutely sure that little nonwhite kids know My Little Ponies are not for them.

I'm extra pissed because I'm an '80s child; the original My Little Ponies were my favorite. I vaguely remember there was an "Indian" pony. He was appropriative as hell, but at least he wasn't another *species*.

Ah, here he is, for anyone who has never seen him:
http://www.etherella.com/scrapbook2/wigwam.htm

(Love the contradiction of the name and the trademark Pony butt-mark, don't you?)

I suppose the horse should have been outright white, as Wapasha III was known for riding a white horse.