Natives and non-Natives alike were quick to slam the US designation of Osama bin Laden as "Geronimo." Here are some of the many reactions from Natives:

Geronimo nothing like Osama bin LadenComment:  These are only a day's worth of responses in the mainstream media. If you hung out on Facebook or Twitter, you probably could see a hundred times as many complaints.

For more on the subject, see Why US Chose "Geronimo" Codename and Bin Laden Codenamed "Geronimo." 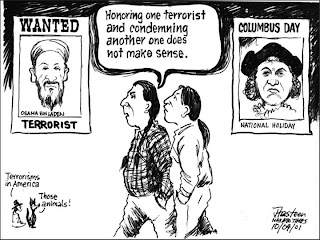 Why not just call Osama Hitler? It would work a lot better, and I don't even think Godwin would object.

The hourly ABC news carried on many AM radio stations, which only runs a few minutes and covers very few topics, actually covered this issue today.

Great collection of posts Rob. I've been trying to find the time to do this, so I'll have to figure how to do this on my blog. Thanks for including me!

I do hang out on Facebook and I went to share a posting from A Good Day to Die page (about the investigations into using Geronimo) and Facebook blocked it as it had been reported as containing offensive material. I have complained to FB about the blocking - I can only image it was considered offensive by those think calling the mission Geronimo was 'honouring' American Indians.

I think you wrote the first response to the issue, Ben, so I put your posting at the top.

For more Native voices speaking out against the codename, see: