The Russell Bates Emmy StoryComment:  Glad to know Russ's Star Trek script was slightly better than the competition: Sesame Street, Captain Kangaroo, and The Pink Panther. Must've been tough to ace Elmo, Cookie Monster, Mr. Green Jeans, and Mr. Moose for best kiddie programming. After all, he had only Gene Roddenberry, D.C. Fontana, William Shatner, and Leonard Nimoy at his side. Good thing they didn't need to call in Rod Serling or Paddy Chayefsky for extra help.

Here are some of the 1974 shows Russ beat out for the Emmy: Speed Buggy, Scooby Doo, Partridge Family: 2200 A.D., Hong Kong Phooey, The New Adventures of Gilligan, Super Friends, Wheelie and the Chopper Bunch, Land of the Lost, and Sigmund and the Sea Monsters. Wow...what a squeaker the vote must've been. How he eked out a victory against these Saturday morning giants I'll never know. 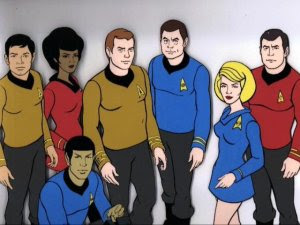 Writerfella here --
Vote tallies for primetime and non-primetime Emmy Awards NEVER are revealed, neither to members of the Academy of Television Arts and Sciences nor to the various nominees. Blue-ribbon panels choose the selections for nominations and, in actual truth, the other 1974 children's shows you named weren't nominated at all. Hard to beat dead horses if they weren't in the race...
All Best
Russ Bates
'writerfella'

That is quite something, actually. Have you actually looked at the writing credits for the first season of "Land of the Lost", Rob? You will be surprised if you do.

You can see the names here

You will be hard pressed to find such a concentration of top flight science fiction writers on another TV show.

No such surprises looking at the writing credits of Speed Buggy and the Gilligans Island cartoon.

Also, a shameless blog plug. My new post links back to this, and features an illustration from the Star Trek episode being discussed.
http://inaholdingpattern.blogspot.com/2008/08/blast-from-past-tv-in-1977.html

Writerfella here --
dMarks, note that almost all the known SF writers who worked for LAND OF THE LOST also worked for STAR TREK The Original Series or STAR TREK The Animated Series or both. Their agents knew their specialties. By the bye, ST TAS kept the name of ST before the public during the long problematical push toward ST Phase 2, and "Serpent's Tooth's" top-echelon Emmy thus became pivotal. Phase 2 eventually became ST: THE MOTION PICTURE. And writerfella was the subject of a lead article in STARLOG #159, October 1990. No brag, just fact...
All Best
Russ Bates
'writerfella'

I've seen only bits and pieces of Land of the Lost. I don't recall its being anything special. If the writing was so great, why wasn't it nominated? Seriously, DMarks, do you have a theory?

Writerfella here --
LAND OF THE LOST, despite critical dismissal that undermined its chances for awards, ran for three seasons and remained immensely popular among children who watched that now are adults who remember and have their own children. Even writerfella watched because it had DINOSAURS in it! And now a big budget feature version is in production, starring Will Ferrell and Danny McBride (PINEAPPLE EXPRESS), for a July 2009 release. Even that incarnation likely will drive critics to the same distraction, but its built-in audiences just may distract critics even more...
All Best
Russ Bates
'writerfella'

Rob: Seriously? I remember Speed Buggy specifically. It was a generic cookie-cutter Hanna-Barbera-type cartoon with a gang of sleuthy kids kids and one freak. Think great dane, talking Curly stooge shark, kung fu hound, gay Revolutionaly War ghost, microscopic gumshoe, etc in other cartoons. I can't imagine how it would have done better than "Land of the Lost", which had some excellent episodes in its first and second seasons.

As for you not being impressed: for one thing, you might have seen one of the bad episodes (like the one where the baby bronto was constantly yawping in a tar pit: too much dino-yawping). For another, you had to have been there. I think you were too old for the "Krofft Generation".

If you were to consider "Land of the Lost" again, ones I would recommend include "Downstream", "Circle", "Hurricane", and "The Stranger". For the Native element, there is the final episode, which had Ned Romero in it. He played an OK Indian and it has considerable Native content in it, but it was like a Gilligan's Island episode.

The third season had a lot of Gilligan's Island type episodes.

I always thought that Land of the Lost had a lot of the same writers as Star Trek partly because Gerrold and DC were friends. In fact, I think it was DC that got him the job in the first place.

Harlan Ellison wrote most of a Land of the Lost script, but it was never filmed.

My dad the genius watched Land of the Lost with me. He said that it was a good show and it wasn't dumbed down a lot for kids. It had some jokes in it that adults got and kids probably didn't. Emily brontosaurus had to be explained to me a few years ago.

My dad probably also watched the animated Star Trek with us, but I don't remember that as well. I do remember that he didn't just watch any old thing with us just to be doing something with us. He refused to watch Lost In Space, even the better black and white ones.

Writerfella here --
Oooh, I need to meet your dad. We'd likely get along famously...
All Best
Russ Bates
'writerfella'

Unfortunately, this is not possible.

Several years ago he got cancer. He did what the doctors told him to do, and the cancer went away. Four years later it came back, and they removed his bladder. They got all of the cancer, but while he was in the hospital they found out that he had heart problems, and two months later he died, probably due to the stress of the whole cancer thing.

My dad was one of those people who like "real science fiction" before Star Trek came along, but he liked to watch Star Trek anyway.

Writerfella here --
Yes, writerfella misses his dad as well. Triple cancer: lung, spleen, kidney, likely precipitated by a lifelong occupation as an auto mechanic who breathed in asbestos and washed grease from his hands with gasoline. Both he and writerfella's mom had read science fiction from their youth forward and they gave their books and their love of it all (movies, too) to writerfella, dooming him to become a forty-years long writer of 'real' science fiction. But writerfella also knows of no greater gift he could have received...
All Best
Russ Bates
'writerfella'

Writerfella here --
POSTSCRIPTUM -- The story is this: David Gerrold (real name: Jerrold David Friedman) in fact got a job as story editor of Filmation's TARZAN animated series on Dorothy Fontana's recommendation. BUT -- his insistence that all of the scripts had to adhere exceedingly and exactingly to the Tarzan mythos lost him that job after only a few weeks. Always one to land on his feet, David used another friend to get the job as story editor on LAND OF THE LOST. By the bye, David NEVER asked either writerfella or David Wise (writerfella's co-writer) about LOTL because David had embarrassed himself by claiming publicly that his script of "BEM" would be the last and final Animated STAR TREK episode ever. Only, there were four more episodes produced subsequent to "BEM", "How Sharper Than A Serpent's Tooth" included. And the Emmy win stole even more thunder...
All Best
Russ Bates
'writerfella'

Russell co-wrote an episode that is still remembered and discussed today, 35 years after it first aired. He played a crucial part in the only Emmy the original "Star Trek" ever won.

Now what exactly are your achievements, Rob?

My accomplishments include two master's degrees, one book, two comic books (so far), hundreds of articles, one of biggest and most popular Native-themed websites, a newsletter with almost a thousand subscribers, a blog with thousands of readers, invitations to speak at museums, etc., etc. Oh, and I kicked Russ's butt in every debate we engaged in.

Meanwhile, what has Russ done since 1980? If he has a single TV or movie credit to his name since then, I haven't heard of it. Can you say "has-been"?

So by your standards, J.D. Salinger is a has-been because he hasn't done anything since "Catcher in the Rye."

Can you say "jealousy?"

Nothing against Russ, but he is no Salinger. Few are.

Okay, I gotta agree with you on that one!

Can you say "trite," "predictable," and "nonresponsive," David? How pathetically lame it is to argue that any criticism stems from jealousy.

To answer your question, I think you have to keep working in a field to be called a has-been. I'd say JD Salinger is more of a one-hit wonder.

I'll ask you again: What has Russ done since 1980? Feel free to answer my question this time.

Whatever Russell has or hasn't done since 1980 in no way diminishes the size of his accomplishment with that single "Star Trek" episode. I have not answered your question because not only is it pointless, it had nothing to do with your original arguement in the main article.

Even if Russell is a one-hit wonder, the fact is he had a hit and you haven't. You are criticizing WAY above your station.