What has McCain done lately?

Is McCain's history with Indians a mixed blessing?And:Comment:  For more on the subject, see McCain vs. Indians. 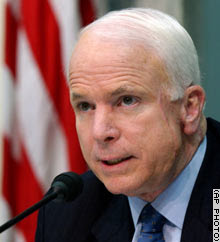 Writerfella here --
And such an impression might amount to a hill of chili beans: 1. IF Barrack O'Bama were Native or even part-Native. 2. IF Natives counted for more than their 1/4 of 1 per cent of the American population, as there are more Vietnamese in the US than there are Native Americans. 3. IF Native American voters nationwide were greater in number than 3/4 of 1 million. And, 5. IF it were not a fact that over 60% of Native American voters are Republicans...
There is a story behind such a fact (No. 5.): when at last the 'blanket law' of the early 1920s was ratified and honored in Indian Country states, few Natives could read or write well enough to grasp the ballots. BUT -- they could place their marks at the top of the Ballot page to vote strictly party line. The symbol for Democrats was a rooster crowing on a fence at the crack of dawn. And the symbol for Republicans was an eagle spread akimbo with a ribbon in its mouth. Three guesses, and the first two don't count: where did the majority of new Native voters place their marks? Ah, history...
All Best
Russ Bates
'writerfella'

I don't know where you got your facts and figures from. I'm guessing you made them up. In any case, let's review:

1) Obama was made an honorary member of the Crow Nation and his mother was part Cherokee.

You're also dead wrong about there being more Vietnamese Americans than Native Americans. The 2006 estimated population for the former group is 1,475,798. (Source: Wikipedia.) That's less than a third of the Native population.

3) Since Indians historically have had low rates of voter registration and turnout, this is one fact you may have gotten right. Congratulations.

5) Thanks for the cute anecdote from 85 years ago. At that time, Indians weren't US citizens and tribes didn't have constitutional governments. Can you say "out of date" and "irrelevant"?

For more on your last point, see Most Indians Are Democrats.