The I'll Be Seeing You: Part 1 episode of Cheers (airdate: 5/3/84), the bar where everybody knows your name, features a bit of Indian lore. Here's a synopsis:Comment:  Semenko, an intellectual elitist like Frasier, enters wearing an Indian-style buckskin shirt. The following dialogue ensues:When Diane sees Semenko, she's such an elitist herself that she recognizes the Arapaho ceremonial tunic. When Sam sees Semenko, he's such a crude fellow that he calls him "Tonto."

Of course, the shirt is probably a bunch of hooey. It looks like a cheap knockoff made specifically for the show. I've never heard of a special tunic worn in a tribal council or given to someone for participating in a Sun Dance. If it were that special, would Semenko wear it in a bar, where anyone could spill something on it?

It's an odd choice of apparel to demonstrate Semenko's personality. Yes, he's an intellectual elitist who disdains the unwashed masses, but it's not clear he's a multiculturalist or even a liberal. Wearing an Arapaho tunic in downtown Boston makes no more sense for him than it would for Frasier.

Also worth noting is the wooden Indian to the right of the bar's entrance. It's a typical Indian "brave" with his arms folded and a vest or cloak around his shoulders. This "Indian" appears constantly--every time the camera pans to the near end of the bar. If you think about it, the statue may vie with Tonto as the most filmed Indian in TV history.

I doubt you'll ever learn anything about real Indians, such as their participation on both sides of the Revolutionary War, in Cheers. Like many Indian monuments, the wooden Indian is a mixed blessing at best. It reminds you of the Indians' existence, but it implies they existed in the past. 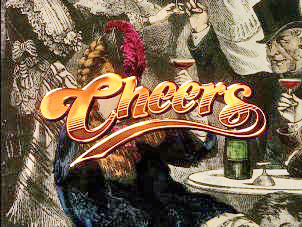 The wooden Indian even had a name: Tecumseh.

Weighing the immense popularity of "Cheers" and the ubiquity of this wooden Indian seen in so many episodes might earn Tecumseh a mere footnote among Native "characters" in television.

Its just a stupid tv show. I never did watch Cheers a day in my life.. That show just doesn't do it me. I rarely watch sit-coms these days.

The "wooden indian" is legendary. And most people don't view it in a negative manner. Its probably more symbolic than an object of ordinary statue. I've seen the wooden indian in Seinfield and this was the only sit-com I've watched in its entireity. There was also another indian topic called--"indian giver". And the indian character was played by an indian woman.