Letter found that led to Indians' 'Trail of Tears'

By Edward ColimoreHere's what the letter actually says:Comment:  So nice of the "father" to help his "children" that way. "Get out of the house, kids, and don't come back. If you're still here when I look again, I'll whip your hides!"

I'm guessing the Indians of that era understood that this "father" and "children" language was condescending and insulting. They probably went along with it to placate the whites who had so much power over them.

For more on the subject, see 1824's Premise and Removal in Trail of Tears.

Below:  "Nathan (left) and Jonas Raab, of the Raab Collection, with the letter by President Andrew Jackson." (Clem Murray/Staff Photographer) 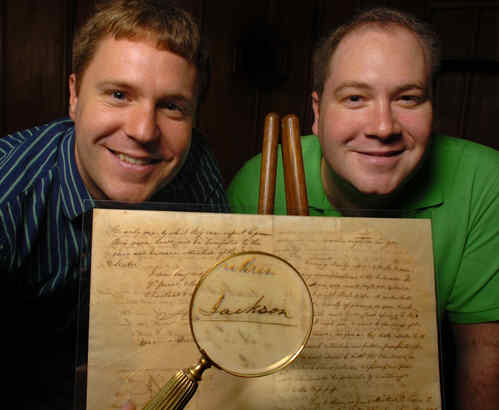 I guess they are smiling because of the money being made...sigh