The wave of Avatar analyses seems to be cresting this week. Here are three with radically different reactions to James Cameron's movie. Call it the yin and yang of Avatar.

Comment:  What these people are wishing for is a stereotypical version of indigenous life--a version without disease, hunger, or conflict (unless aliens invade your world). Perhaps they should go to Europe and find some Indian "hobbyists" to join.

Of course, you'd have to be pretty naive to think a "natural" lifestyle--with heat, bugs, and dirt and without processed food, shelter, or technology--is ideal. Therefore, something else must be going on here.

Most likely explanation: People are going along with the gag: pretending that Avatar is a revelatory, life-changing event.

2nd most likely explanation: The people posting these comments are pre-teens or teens who have never thought about the meaning of life until seeing Avatar.

Fortunately, another article offers some "solutions" for these people:

1) Make some real-life friends.
2) Stop hanging out with negative people.
3) Be interesting.

Really, that's what it recommends for anyone silly enough to take Avatar seriously.

For more on the subject, see Noble Savages in Avatar.

Green truth is alien to us

By Andrew BoltBolt goes on to complain about "limousine liberals" such as Al Gore and James Cameron. I.e., people with huge carbon footprints who advocate environmental action.

Bolt spends 90% of his column mocking his straw-man targets. Not until the end does he try to justify his thesis: that Avatar will end the environmental movement:Is that it? People will realize that Avatar's 100% natural lifestyle isn't satisfying? So they'll reject environmentalism and opt instead for the 100% artificial lifestyle of many Americans today?

Really, you can't imagine any intermediate points between the status quo and going native a la Avatar? You think such common-sense ideas as recycling, reducing energy use, and simplifying one's life inevitably lead to barbarism? That's so stupid it doesn't deserve a response--except to mock it unmercifully.

I'll go out on a limb and counterpredict that environmental awareness will increase rather than decrease in the post-Avatar era. If Bolt or anyone wants to bet on this, let's do it. Or you could just forward me your money, since I'm clearly going to win.

For more on the subject, see Why the Right Hates Avatar.

The blue aliens who helped save the planet

By Alice ThomsonComment:  This is only one child's reaction, but what if it's happening all over the world? What if kids everywhere are watching Avatar and taking its Simple-Simon message seriously?

No wonder conservatives are going crazy over Avatar. They realize they're losing the hearts and minds of children to liberal ideas such as tolerance.

If kids are getting the movie's message, I'll have to take back all the negative things I've said or implied about it. Today's youngsters are the ones who will have to deal with the environmental destruction we "grups" (grown-ups) have caused. If Avatar is enough to inspire a generation, I'll have to deem it a success.

That's kind of what I hoped to do with my multicultural comic books featuring Native Americans. Namely, to promote indigenous values through a popular entertainment medium. Like everything else, saving the planet is fun when you combine it with 3D effects, battles, and beautiful scenery.

If James Cameron beat me to it, more power to him. He's proved what I've argued many times: that there's a market for Native-themed stories. People will pay big bucks for an alternative to mainstream ideas such as "look out for no. 1," "might makes right," and "winning is everything."

In short, Avatar proves that movies with indigenous themes can make huge amounts of money if they're done right. Hollywood, are you listening?

For more on the subject, see Ecological Indian Talk and Multiculturalism Sells.

Below:  "Al Gore says: If you and your kids won't watch An Inconvenient Truth, watch Avatar instead." 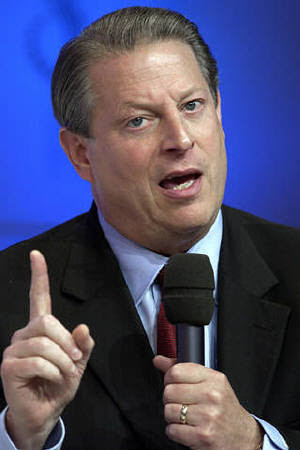 Here is a more serious assessment of the phenomenon, which really made me think. I first put it off too.