In Road Warrior, Scott Bear Don't Walk, a Crow Indian, writes about his experiences as a Native Rhodes Scholar.

His misgivings about going to Oxford:How he was a tribal hero and role model:Why he ultimately quit the program:And:Comment:  As far as I know, Bear Don't Walk is the only Native Rhodes Scholar.

Some good points here about how heroes and "warriors" aren't necessarily physical fighters. And about how it's hard to shake one's cultural upbringing. The rest of the essay is interesting too. 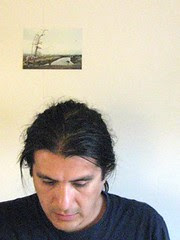