Images of Indian in the Cupboard

A look at three illustrations for The Indian in the Cupboard is instructive.

First we have the original book cover. A generic Indian is in the center. He's frozen in midstride, like a mannequin, a hard and lifeless object. He's displayed like a stuffed animal, trapped in a box, literally compartmentalized.

He's surrounded by a standard set of stereotypes. A chief, a teepee, a bow and arrow, a cowboy. Both the Indian and the cowboy have their weapons ready. The cover suggests the story will be about cowboys vs. Indians, warfare on the Plains, Indians as surly savages holding up the tide of progress.

Since I haven't read the book, I can't say for the sure if the contents match the cover. But the cover strongly suggests the Indian will be a stock character, one-dimensional, as interesting as a plastic toy. If this isn't Banks's view of her creatiion, she should've insisted on different art. 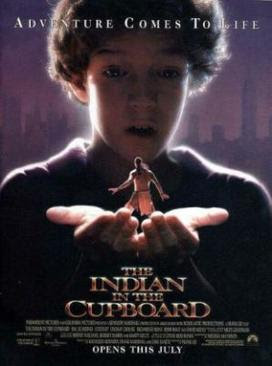 Here we have the original movie poster. On the plus side, the Indian is now a living being. The stereotypes are gone. It's clear the story will be about the relationship between the boy and the Indian.

On the minus side, the boy looms over the Indian like an all-powerful god. He's limned in light like an angel with a halo. His hands glow as if he's just given birth to a miracle. As if he's created the Indian out of clay or thin air.

The Indian looks startled or scared, as if he's meeting his maker. He's helpless, powerless, literally in the boy's hands. It's a perfect representation of the great white father looking down upon his poor little Indian. The cover couldn't imply more of a paternalistic, superior-to-inferior relationship if it tried. 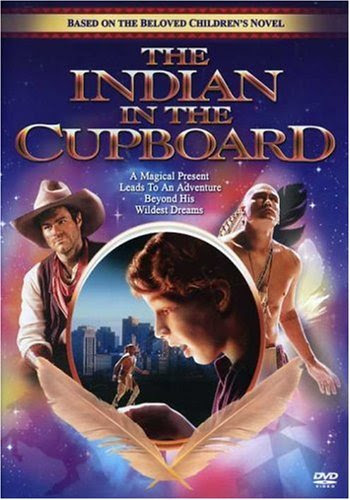 Finally, presumably after critiques such as this one, we have a second movie poster. The Indian is now a full-fledged character, not simply a toy or a little person. He's joined by a cowboy with equal stature. So now the story isn't just about a boy and his Indian. It's about a boy and two men and their relationships as equals.

The poster still includes an image of the boy holding the Indian, but it's less significant now. The circle conveys the idea of magic (e.g., through the looking glass) as well as the angelic glow. What light there is appears to be shining onto the boy, not from him.

Moreover, the Indian is larger than he was, making him more of an equal. The boy is more clearly gaping in wonder. Most important, the Indian is leaning forward as if to challenge the boy. No longer is he scared; rather, he's demanding to know what happened.

But the point here isn't to make the most artistic image. It's to show how you can package the same material in different ways. The creative choices can profoundly affect how you see and interpret the results.

Thematically speaking, there's no question the third image is the best. The first two images probably shouldn't have seen the light of day. But give the creative types credit for finally getting it right.

For more on the subject, see Thoughts on Indian in the Cupboard and Litefoot Dispels Stereotypes.
Posted by Rob at 9:04 PM

Email ThisBlogThis!Share to TwitterShare to FacebookShare to Pinterest
Labels: Indian in the Cupboard, movies, stereotypes

Perhaps if you had read the book, or at least seen the movie, you would better understand the artwork. Maybe you should do so in the future before you criticize something. It is apparent that you have never so much as read a summary of this story.

Actually, I've seen the movie and read summaries of the book. Maybe you should peruse postings such as Thoughts on Indian in the Cupboard before you reveal your ignorance.

Feel free to let us know when you have an actual criticism of my posting. As it stands, your content-free comments are worthless.

Learn to respect the opinions of other, Rob, or you will end up alone and friendless in the future.

Anon: Please state the opinions which Rob disrespected. All that's there in your comment were false assumptions, not opinions. And, oddly enough, you actually had nothing concrete to say about "Indian in the Cupboard" or Rob's comments on it.

As DMarks said, what opinions, Anonymous? The only opinions you've offered are insulting ones about me.

If so, go ahead and say it. But whatever you do, stop wasting our time with your content-free comments.

FYI, Oyate's review of Indian in the Cupboard proves I was right to judge the book by its cover. Sorry to burst your bubble again, Anonymous.