Want to Use My Suit? Then Throw Me Something

The "honoring people by imitating them badly" rationale doesn't work in any other context, so why should it work here? Answer: It doesn't.

Below:  "Last Friday, at a St. Joseph's Night parade in New Orleans, Santana Montana of the Monogram Hunters tribe went to greet his father, David Montana of the Yellow Pocahontas tribe." (Chris Bickford for The New York Times) 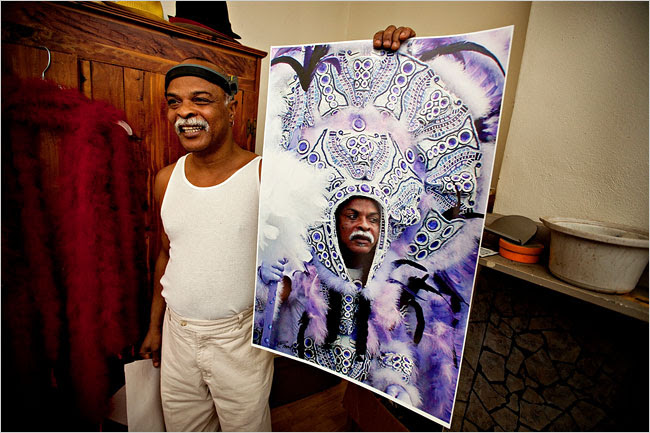 Rob Capriccioso offers some background on these faux "Indians":

Capriccioso hits the point home:Exactly. As Capriccioso indicated, the irony of this situation is rich.

The Mardi Gras stereotypers are upset because people are (mis)appropriating their costumes. Yet they're doing the same thing: (mis)appropriating Indian lore. How would they respond if a real Indian said the same thing to them that they're saying to the photographers? "Oh, well...that's different. Our exploitation is sincere and theirs isn't. We don't just admire real Indians, we really admire them."

Their usual rationale is that Indians helped their ancestors, so their homage is justified. But this isn't much different from the excuses used by the Cleveland Indians or Washington Redskins. "An Indian player or coach helped our team, so that justifies our stereotypical mascot homage."

Below:  Which "homages" are sincere and flattering and which aren't? 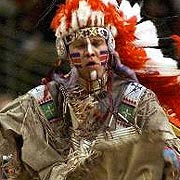 To drive the point home further, "Mardis Gras Indians" are stealing more than just our traditional outfits, they're stealing our Pow Wow Grand Entries, to celebrate hedonistic behavior that no ethnic group would ever find a reverent to them, had their cultural inheritance had been taken instead of our's.

The history of the "Mardi Gras Indians", as told to me by several individuals over many different years, began with the collapse of the French economy/power structure. This lead to French plantation owners in the Louisana area to free their African slaves, as the plantation owners couldn't afford to feed and clothe the slaves, anymore.

Once the African slaves had been freed, they flocked to the regional Native communities, where they "learned a new form of music, dance, and dress". Arguably, what the Africans were introduced was in fact a Pow Wow. After a few months with the Native communities, the Africans moved towards the cities of New Orleans and Mobile, bringing with them this "new music, dance, and dressing". As was told to me by many different people, as I've said before, these Native cultural appropriations are what became known as the earliest forms of Blues music, Jazz music, Gospel music, and the New Orleans/Mobile style of celebrating Mardis Gras.

I do find it overly ironic that these "Mardis Gras Indians" are trying to sue for copyright protection... maybe we should sue them and basically the entire American music industry too, enit?