Arts and Ideas:  "Intrigue and Novelty" Art ExhibitComment:  I don't have anything to say about the exhibit. I just find the painting by Debra Yepa-Pappan below interesting. 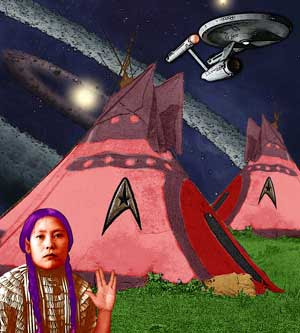 With their "eyes" and Enterprise emblems, the tipis look like alien members of Starfleet. The Indian woman has Vulcan ears and is doing the Vulcan salute, of course. To me the message is something like, "When we look at Indians, we see them as some sort of nonhuman species. But really they come in peace, and they're no different than the rest of us. No matter how alien they seem to us, we're all brothers under the skin."

That's the first interpretation that came to my mind, anyway. For more on the subject, see The Indian-Star Trek Connection.

I couldn't find much about Debra Yepa-Pappan on the Web. I gather she's a visual artist, of Jemez Pueblo/Korean ancestry, and married to artist Chris Pappan.

Here's another of her paintings:

I think it's a hypocrite thing to say when you say we're all brothers, because brothers don't go to your house, kill your family, lie to you, steal from you, start living in your house just like that, take your room, and make you sleep in the smallest places of the house, then keeps the title of the house, making everyone call him the owner.