The latest on a story I noted last year:

When Scholarship and Tribal Heritage Face Off Against Commerce

Why hasn't any story made this clear until now? What are the dimensions of this small stone mound?

Some of the old stories do refer to the stone mound and the underlying hill as two separate things. But what portion of the hill is the stone mound in question? One percent? Ten percent? Fifty percent? Or...?

Without a clear idea of where one object ends and the other begins, people will assume the stone mound is the entire hill. This is especially true since the dirt hill is studded with loose stones. It's perfectly natural to assume "stone mound" refers to most or all of the hill.

I'm pretty sure most of the activists trying to save the mound thought exactly that. I've never heard one say, "We don't care about the big dirt hill. Only the small stone mound at the top matters." Every article, including this one, should've made the distinction clear.

2) Why did Clouse change his opinion 180 degrees? Doesn't someone want to speculate?

Did he make gross mistakes in his first report? Not according to other archaeologists. Was he paid off by the city or developers? I'd say the reporter should've raised this issue even if no one was willing to discuss it.

3) Dr. Holstein says the small stone mound is gone, but Mayor Smith says it's still there. One of them is wrong, so can't we figure out which one? Have Smith or a third party identify the mound's supposed location. Get Holstein and Smith together and reconcile their stories. Etc.

It's almost ridiculous to end the story with this uncertainty about whether the mound still exists. Really, it's a stone structure in plain sight. People have been talking about it for almost a year. But no one can tell us how big it is or whether it's still there? Insane!

Below:  Not the mound in question. Rather, the large dirt mound that may or may not have a small stone mound at its top. 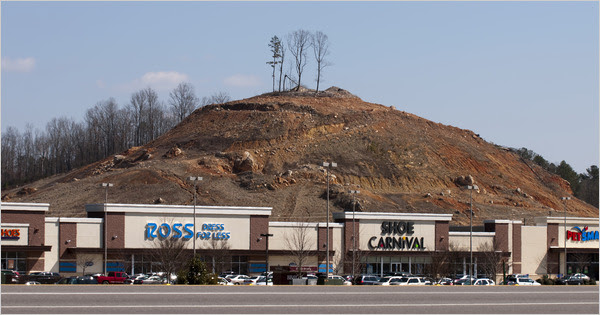