By jcwin228Someone posted this comment on Facebook:Comment:  I haven't seen this movie, but the Facebook comment sounds about right. Fear of Native things that go bump in the night--white buffaloes, manitous, spirits, ghosts, zombies, demons, monsters, werewolves, skinwalkers, wendigos, sasquatches, etc.--is often a disguised fear of Native spirituality and other "soft" Native values. It's a fear of Natives, period--of what they have to tell us about our crass, profits-over-people culture.

In short, it seems the movie's White Buffalo is a stand-in for the marauding savage Indian. Look out, America...buffaloes and Indians on the warpath!

In a Native version of this story, the heroes wouldn't necessarily kill the monster. They might reason with it, gamble with it, trick it, outmaneuver it, leave it trapped, or free it from whatever spell it was under. That monsters are for killing is a typical Western trope.

For more on the subject, see Hercules vs. Coyote:  Native and Euro-American Beliefs and America's Cultural Mindset 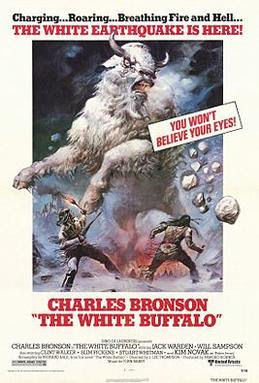