Israel and the Coushatta: one miracle that deserves another

Though ties between the Coushatta and the State of Israel have taken on an economic tone, the relationship is ultimately rooted in a shared appreciation for and commitment to nationhood, sovereignty and self-determination

By Allison GoodComment:  As I've noted before, many Indians sympathize with the Palestinians, not the state of Israel. You know, because Israel stole the Palestinians' land and keeps them subservient in reservation-like areas.

Below:  "Coushatta tribesmen meet with an Israeli delegation." 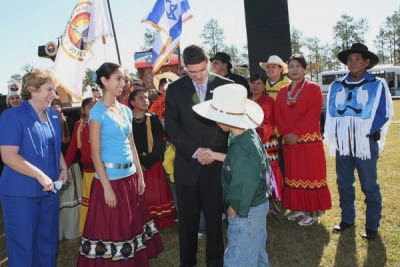