I haven't reported on the recent Whiteclay lawsuit because I'm not sure it qualifies as pop culture. But this op/ed piece on the subject caught my eye:

By Stew MagnusonThat's what's happening now. But Magnuson notes another location called Swett where Indians can buy alcohol even if Whiteclay is shut down. Here's what he concludes about the lawsuit:Comment:  In 2010, various parties sued Whiteclay's beer sellers for a treaty violation. As far as I know, that lawsuit went nowhere.

As for this lawsuit, I tend to agree with Magnuson's views. It's a great publicity stunt, but I don't think it has a chance of winning. Prohibition won't do much good by itself; what Pine Ridge needs is a comprehensive strategy against substance abuse.

For more on Whiteclay, see Whiteclay = Genocide? and Whiteclay Protests Are "Wildly Ineffective." 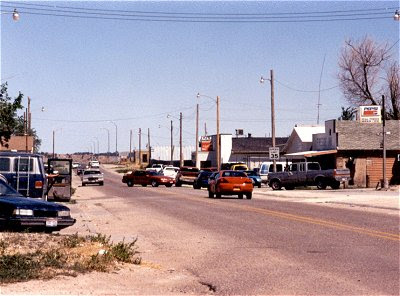 You are not looking at the bigger issue here. Perhaps you cannot understand that doing something is always better at doing nothing at all, even at the risk of an unwinnable lawsuit. The point here is that Whiteclay becomes an issue for the community it effects, not the pros and cons of a legal brief.

I think it wise for tribes to build drug and alcohol facilities where those communities have deaths due to drinking. Otherwise, what's the use? The education starts young and in the home.

If it takes a legal stunt to bring attention to alcoholism where its needed most, I'm all for it!

There is never an excuse for a "legal stunt" without merit. The legal system should not be polluted by such.

Perhaps if those who engage intentionally in "legal stunts" should face stiff fines to keep such matters that don't belong in the courtroom out of it.

"The point here is that Whiteclay becomes an issue for the community it effects, not the pros and cons of a legal brief."

To me, that's another way of saying it's a great publicity stunt. Publicity brings attention to an issue that isn't getting enough of it. So no, I didn't miss the point.

If the lawsuit has a chance of winning, I don't consider it frivolous. What odds of success do you consider acceptable, DMarks, and how do you determine the odds before filing the suit? In a case without precedence like this one, I don't think anyone can be sure it'll fail.