Perhaps because of the 40th anniversary of Wounded Knee II, this image was floating around Facebook recently. I didn't pay attention to it until someone asked me about it. Then I reposted it with the following comments: 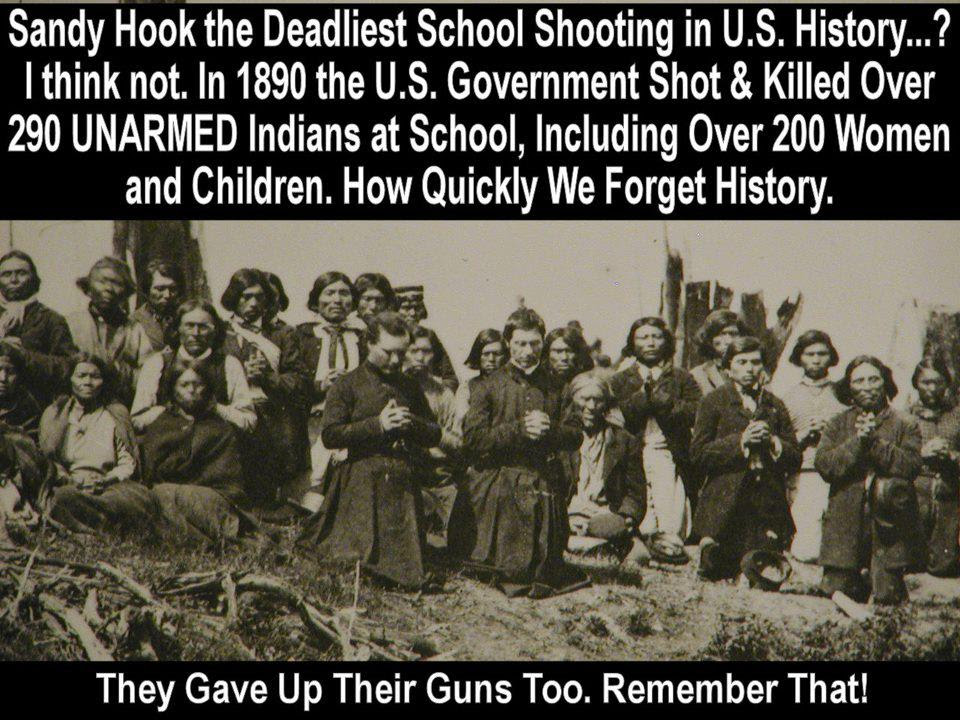 1) Wounded Knee wasn't a school shooting. 2) The massacre happened while the troops were disarming the Lakota, not after. 3) More guns wouldn't have made a difference since the US had more or less won at that point. 4) Gun nuts are stupid.

Also, no one's proposing to take away people's guns. The right-wing hysteria on this point is...hysterical.

This posting led to the following discussion with a Facebook friend:The year and the number dead makes it clear this refers to Wounded Knee. No, there was no school involved in the massacre. The Lakota were camping in a field, not at a school. I doubt any of the people killed had ever attended a white man's school.

The massacre did occur while the Army was taking the Lakotas' guns. Gun fanatics are using this fact to argue against gun control.

I presume they're trying to arouse liberal sympathy by pretending that gun confiscation was behind Wounded Knee and other Indian massacres. As far as I know, a lack of guns wasn't a significant factor in any battle or massacre, so the claim is false.They aren't as sharp as I am. They're probably not paying attention to the final line. Superficially, the message is, "You think Sandy Hook was bad? Wounded Knee was much worse." But the real message is, "The government kills people after taking their guns, so don't support gun control."If they're sharing it without thinking about or commenting on it critically, they aren't that sharp. The "290 unarmed Indians at school" line is patently false.

I'm pretty sure the picture isn't from Wounded Knee either. The two guys in front look like white men leading a prayer service. Why would people be lined up to pray just before a massacre when they were surrounded by machine guns?I've told you my theory. People are missing the obvious because Facebook encourages mindless sharing. They may do things mindlessly, but I don't.

If you disagree with this theory, what's your explanation for why people are sharing it? You think they know something about the Wounded Knee massacre that I don't? What, exactly?

Image = propagandaAs I said, you theoretically arouse liberal sympathy for guns by painting the government as an evil killer of innocent unarmed people. Of which Wounded Knee is the most famous example.

Never mind that this same government used force to integrate the schools and safeguard other civil rights. It's silly to think the government still wants to massacre civilians 123 years later.

As for why now, it could be just a coincidence. It's a little farfetched to think anyone's making a connection between Wounded Knee II, which happened in 1973, and this image. Wounded Knee II happened in the same area but it wasn't about the massacre 83 years earlier. Not directly, anyway.

People may be sharing this because everyone's talking about Wounded Knee II today, and it reminds them of Wounded Knee I. But I doubt someone created it to be shared today. I bet it's been floating around for weeks or months, and just gained currency today.The sepia-toned photograph of Indians is meant to remind you of Wounded Knee. But pictures of mangled bodies might not arouse the same sympathy. Perhaps more important, you couldn't pretend Wounded Knee involved a crowd gathered at a school. Showing the poor defenseless "school shooting victims" before the gun-taking government slaughtered them increases the propaganda effect.

As for whether it's obvious, ask people who shared it without commenting on the pro-gun message. Let's see what they say.

P.S. This is a good case for your Word of the Week "insidious." <grin>The photo's origin

Kamloops is in British Columbia. And what exactly is this school? Wikipedia provides the answer:

Kamloops Indian Residential SchoolI thought those were tipis in the background of the cropped version. But they may be planks from a cedar house, and pine trees, in the Pacific Northwest. Had I seen the original photo, I might've guessed that.

Not a bad choice for a fraudulent photo. You have Indians from the right era--the 1890s. They're dressed in the clothing of the times. There are no clearcut cultural identifiers such as tipis or totem poles. And the people look like innocents before the slaughter.

So the photo is from a residential school. Most of the people look like parents, but a few may be children. In any case, it has nothing to do with Wounded Knee or any massacre with 290 dead. As I thought.

My correspondent was so upset by Natives sharing this image that she posted a plea asking them to stop. Perhaps they heeded her, because the image stopped showing up. Or perhaps it ran its course and people moved on to the next Internet meme.

For more on gun control, see Gun Nuts Fear "Race War" and America's Culture Based on Violence.
Posted by Rob at 6:46 PM

Thanks for the research! :)

The Second Amendment exists to put down slave rebellions and attack Indians.

That said, I really don't mind guns, so long as they're not in the hands of felons or the mentally ill.

The real "nuts" when it comes to guns are those who want to wipe out the 2nd Amendment, and have the government steal the guns of law-abiding people.

Fortunately, almost no one is proposing to do that, DMarks. Despite the lies and misinformation spouted by right-wing gun nuts.

Wrong again left wing hypocrite, you call us gun nuts when your own role models like Feinstein, Obama, and even Rosie O'donnell rely on people with guns. People like O'donnell say that individuals who carry a gun ought to be put in prison. Secondly even if the natives lost even with their guns on hand, the US calvary would have suffered significant losses in the process (which is why they disarmed them).

No one's calling for the elimination of guns, dumbass. Apparently you're too stupid to understand this, like so many ignorant gun nuts, but regulation isn't elimination. Obama hasn't done a thing to take away your guns despite your paranoid ravings to the contrary.

The Indian Wars were over by 1890, dumbass. The cold, huddled Indians at Wounded Knee had no chance of reversing the outcome or inflicting serious harm on the US Army. You're living in a right-wing fantasy world if you think otherwise.