Summing up Flags of Our Fathers 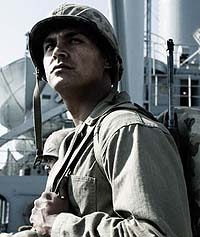 Writerfella here --
At first, Adam Beach was being talked-up as a possible nominee for Best Actor for FLAGS OF OUR FATHERS. Then, after the film was released, the talk changed to his possibly being nominated for Best Supporting Actor. Now comes the news that Eastwood's companion film, LETTERS FROM IWO JIMA, has been moved up to a Dec. 20, '06 release date, with a possible Best Actor nomination being talked about for lead actor Ken Watanabe. It just may be that the two films by the same director could cancel each other out as far as the Academy voting goes, with the likeliest possibility being that FLAGS could be knocked out of the running. 'Course Steve Soderburgh was nominated for Best Director for TRAFFIC and ERIN BROCKOVICH in 2001, and then won for TRAFFIC. If that's confusing, wait until Oscar night!
All Best
Russ Bates
'writerfella'