Zagar not so horrible?

"Why do you look so hard for rascism or stereotypes especially when its not there?" 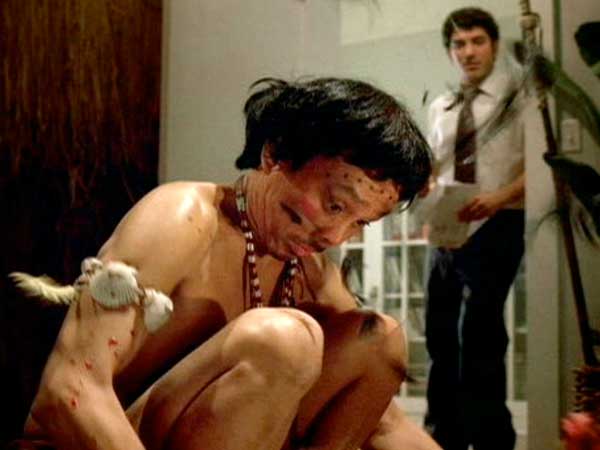 Email ThisBlogThis!Share to TwitterShare to FacebookShare to Pinterest
Labels: Zagar

a couple of comments: It doesn't make a difference whether you stereotype majorities or minorities: no difference at all.

That being said, I find the Capitol One pillagers stereotype harmless because [i]it has even nothing to do with living people[/i] (or even recently-living ones). The Zagat stereotype, in contrast, does apply to a living ethnic group.

Writerfella here --
There is yet another such commercial, and it is for Capital One. Supposedly, a family's air travel miles are blacked out and so they must go on vacation to visit 'relatives' really far, far away. And we find them visiting an Amazonian Native tribe where the father gets blowgunned and then hogtied to a pole and hauled away, perhaps to be boiled for dinner.
A reversal on the Zagar spots, so to say, and ostensibly a source of the same stereotypes about Natives. But does not intent play any part in such a circumstance? Is it therefore the intent of the spots as conceived, written, and performed to present and perpetuate such perceived stereotypes? Or is it the case that deliberate, continuous, intentional, malignant, purposeful, Machiavellian conspiracies exist to foster and underwrite stereotypes FOREVER? Maybe yes, maybe no, but writerfella must ask: does conspiracy theorist condemn what conspiracy theorist not understand?
All Best
Russ Bates
'writerfella'

See The Harm of Native Stereotyping: Facts and Evidence for several answers to the question of intent. For instance:

"I contend that American racism as we inherit it today is a social construction of reality. Prior to Columbus, the world functioned for millennia without the race construct as we understand it today. Therefore, we must understand that racism is the primary form of cultural domination in the United States over the past four hundred years. It is cultural construction by social scientists and other students of group life as well as the mass media. Together with schools, legal systems, and higher education institutions, these forces participate in a major way in legitimizing and reifying the invalid construct. Consequently, the race construct is now internalized by the world's masses. All these voices together have helped to perpetuate this ignorance and distortion."

Writerfella here --
Geez, of all the Natives that writerfella might select for one of his rare citings and quotings of anyone, 'Doc' Pewewardy would be somewhere between Yeagley and a hard place. The man is a near-miscreant, a member of AIM, and one who opposes any motions of Comanche government that are not already a part of the older Comanche culture. The tribe voted in a Bingo operation back in the 1980s and Pewewardy and his relatives harrassed the public that attended and even blocked the road to the Comanche Complex several times, even to firing weapons in the air. Why? Because his grandsons no longer could use the gymnasium that had been converted into a Bingo hall. He happily takes his per capita share of the now-extensive Comanche gaming operations but nonetheless remains a vocal opponent of the Comanche casinos and an advocate of tearing them down to the ground.
He has run for Comanche Business Committee offices several times and, when he was defeated each time, he denounced the elections as having been rigged.
All Best
Russ Bates
'writerfella'

I know of one Native community that has a wonderful huge gymnasium (large enough to hold important ceremonies in if the weather is really bad) because of the casino money.

"Rare citings and quotings" is putting it mildly. At least I cite and quote sources for my claims.

Opposing a gaming operation would suggest Pewewardy is a traditionalist, which would add (rather than subtract) credence to his views on racism and stereotyping. In fact, being anti-business does nothing to discredit his PhD or his expertise on cultural issues.

Here are two more quotes from Native experts. If you can't dispute the quotes themselves, perhaps you can (try to) discredit their credentials too:

"It's really advantageous for...power people not to know anything about the culture. [If they know] they're going to have to do something about the Indian situation."

"[If people learned about Indians, they] would have to say, yes, and agree and press the Supreme Court and US Congress to give the Black Hills back to the Lakota people...to say, yes, the Native American people do own Arizona."