Comment:  Russell Bates sent me this image. He claims the painting shows what would happen if John Herrington, the Chickasaw astronaut, met "real" Indians. But I say the 'naut's not Herrington.

One could take this as a comment on the price of progress, or what happens when you venture where you don't belong. I'm reminded of the joke about The Navajo Message to the Moon:Incidentally, Kim Stanley Robinson's Mars novels were all about preserving vs. developing the Red Planet. The people defending the planet had an Indian-like attitude. They called themselves Reds and were aided by a character named Coyote. 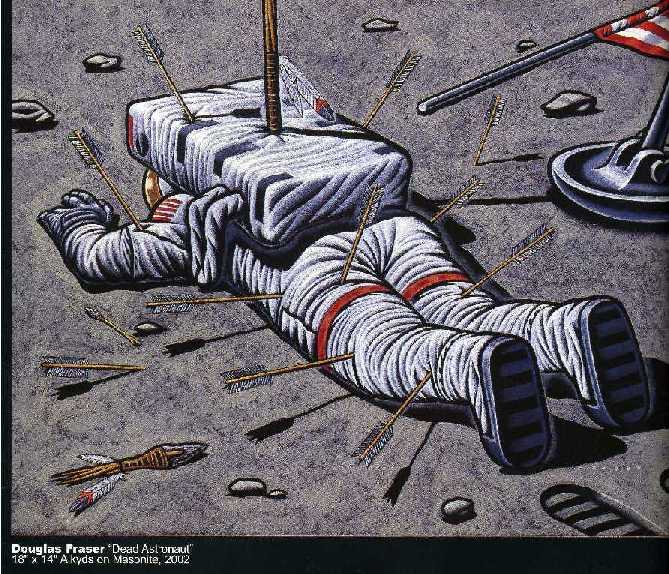 Writerfella here --
The joke here is that John Herrington, ostensibly "the first Native American into space", looks no more Native American than does Neil Armstrong. Herrington's Chickasaw Native blood is thinner than the upper stratosphere and thus meeting real Native Americans would mean that all they would see is a White man and their reaction would be what is depicted in the painting. Sort of takes the edge off the joke, but it seems that those who want "clarity of story-telling" need it fed to them on a spoon...
All Best
Russ Bates
'writerfella'

So, who matches the stereotype here? The astronaut who is a Native American, or the Indians in this cartoon who shot the arrows? Hmmmm....

Writerfella here --
Well, it must be the so-called "First Native American into space", as in "The only good Indian is..."
And by the bye, Voyageur, say hell to Capt. Janeway for writerfella!
All Best
Russ Bates
'writerfella'

What? And no good word for Chakotay? About warm sonic showers?

"Herrington's Chickasaw Native blood is thinner than the upper stratosphere..."

Hmmm...maybe I should keep my mouth shut under the circumstances...

Yeah, I think I'll definately keep my mouth shut. Getting into "redder than thou" arguments doesn't really accomplish anything besides raising everyone's blood pressure.

Writerfella here --
In actuality, those kinds of "arguments" are more in the manner of what Rob Schmidt calls 'semantics'. Interesting word, as the PRINCIPAL meaning of the word is as a branch of formal linguistics concerned with the development of and changes in, the meaning of words. Where that once might have indicated scholarly study of word meanings, Rob uses it to mean more or less the difference in the meaning of words as perceived by individuals. In other 'words', even the word 'semantics' has undergone a change in its meaning, according to Rob, from mere mutation into permutation. What Rob fails to recognize in tossing off that word so dismissively is that he ignores the other three-fourths of the processes involved which writerfella knows from his extensive training and long experience as a writer fella: those are syntax, pragmatism, and semiotics. Plus, there are other factors such as intonation, denotation, and connotation which Rob simply leaves out because they would be inconvenient to his rejection of the thesis of another. Very akin to negatively criticizing APOCALYPTO without ever having seen it for one's self and thus being forced to think for one's self...
All Best
Russ Bates
'writerfella'

Writerfella here --
POSTSCRIPTUM -- Robert Beltran, who played a Sioux as THE MYSTIC WARRIOR on ABC in 1984, was pretty wishy-washy as Chakotay on STAR TREK: VOYAGER and just may have been unconsciously influential on tattoo mania. After all, he also was the SECOND 'Native American' crewman in the STAR TREK mythos, AFTER Dawson WalkingBear, though writerfella will admit to liking the Maquis symbol from Chakotay's original leather uniform. writerfella had the symbol copied and made into a piece of Native jewelry, which he always wears everywhere he wanders...
All Best
Russ Bates
'writerfella'

At least Dawson WalkingBear had a more specific and "real" background. I recall Chakotay, at least in the shows, having a sort of generic, New Agey background.

Correct me if I'm wrong, but I don't think they ever really named what tribe or nation Chakotay was from in the show. It's not even mentioned in the Wikipedia article.

In actuality, those kinds of "arguments" are more in the manner of what Rob Schmidt calls 'semantics'.

Your point is well-taken, sir. I will just say that as a thoroughly white-assimilated NDN of relatively thin blood, who did not grow up in the culture, who did not grow up in the language, whose total knowledge of the language and culture is self-taught or from dribs and drabs of family history, who has never lived on the Rez, who has never even lived in Oklahoma, who does not "look NDN," who does not have an "Indian name" (my father's family name is, I think, Finnish), who has never experienced discrimination because of my heritage, whose heritage no one would ever likely know without asking, I am acutely, painfully aware of my position. I would never ever presume to lecture anyone who has had those experiences on who is or is not NDN. That would not be go-hi-yu-gi. I didn't get a vote on my granny's mother's decision to marry a white man and move to Texas. So be it. I do the best I can. I learn what I can and I try to pass that on to my sons. I contribute to the tribe. I follow tribal politics; I'm trying to help a friend of mine in her campaign for principal chief. But even keeping all that in mind, the "blood quanta" argument makes me flinch. For one thing, it's adopting a racist yonegv notion; and for another, it's a suicide pact. Tribes with high blood quanta will eventually vanish. There just aren't enough of us left. On the other hand, I don't like the idea of people with miniscule blood quanta, no cultural identification and no interest in the culture, strolling right in to pick up their CDIB cards, either. I don't know what the answer is. As I said, I'm just doing the best that I can with decisions that were made long before I was born.

Writerfella here --
Don't call writerfella 'sir', as he may be older than you but his mind is younger than is yours. Voyageur is quite correct that Chakotay was a generic Central American Native without a tribe named but with a culture stolen from Plains Sioux by Ron Moore, Brannon Braga, and Rick Berman. Witness that the first STAR TREK franchise totally designed by the 'Gang of Three' was cancelled after four seasons for being the Poor, Pitiful Pearl of them all.
That does not mean the end of STAR TREK, however as a new motion picture is on the boards to be done by the producers and creators of the TV series LOST. In 2008, we will see STAR TREK revived and also the film will generate a NEW TV series, as well. Sometimes, one only has to wait for the future to catch up with the present...
All Best
Russ Bates
'writerfella'

Note that Russ's interpretation of the painting is his own, not Fraser's. There's nothing to indicate the astronaut is supposed to be John Herrington--or William Pogue, the real first Native in space. I'd say my interpretation is the likely one, not Russ's.

You could say the arrows are stereotypical, but I think they work in this context. They're a comment on America's drive to extend its domain to the moon--i.e., on manifest destiny--not on the savagery of Indians.

You won't have much luck engaging Russ in the question of who's an Indian, because he can't or won't answer the question. All we know is that it involves a "genetic racial memory" or an "awareness granted by heredity," concepts Russ apparently invented out of thin air.

I've posted extensively on Chakotay at Star Trek Voyager:  Chakotay. He supposedly comes from the Rubber Tree People of Central America, not the Sioux. Suffice it to say that the character is more stereotypical than not.