A Muslim Among Native Americans 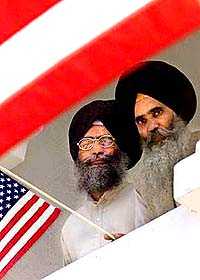 Uh, those two guys in the picture aren't Muslim. They're Sikh. A completely different religion!
Although it does match your report in a way... Sikhs are Indian!

Yes, I know. The point of the photo was to show people from a non-Anglo background trying to fit in.

FYI, Sikhs come from the same part of the world as Muslims, in general. And even though Sikhism is a separate religion, it was derived from Islam.

Anyone, sorry if the photo bothered you. Next time I'll use a picture of a flag-waving Muslim if I can find one.

FYI, Sikhs come from the same part of the world as Muslims, in general. And even though Sikhism is a separate religion, it was derived from Islam. ////

India and the Middle East aren't really "the same part of the world." We are divided by thousands and thousands of miles, several time zones, and cultures. It's not "all the same," any more than the Choctaw and the Navajo are "basically the same." Kind of offensive.

Anyone, sorry if the photo bothered you. Next time I'll use a picture of a flag-waving Muslim if I can find one. ///

The Muslim "part of the world" I was referring to extends from the Middle East to Pakistan to Indonesia. So yes, India is in the same part of the world. It's arguably in the middle of this continuum.

In fact, I believe India has the third largest Muslim population after Indonesia and Pakistan. So it's literally as well as figuratively in the middle.

Now that I've explained what I meant, it's not at all offensive. Right?

I think most Lakota (and probably Muslims for that matter -- though for a different reason) would be thoroughly offended by such a comparison. Lakota are "kafirs" in the eyes of Muslims and to erase such status they would have to abandon their Lakota nation and convert as Islam is not only opposed the concept of a nation, but encourages violence against pagans, polytheists, animists, and all other non-"people of the book," as fellow Muslims along with Christians, Jews, Zoroastrians, and the erstwhile Sabians are conveniently protected from harm, though must still pay a tax. Islam is just as evil as Christianity if not more so (something easy to fathom considering both are Abrahamic), and I salute all heroic peoples who have maintained their traditional religions like the Lakota have done. Intolerance of the Lakota nation is intolerance against peace; intolerance against Islam or Christianity is intolerance of intolerance -- something indubitably justifiable.