Blue Corn Comics at the Eiteljorg

What's Black and White and Red All Over?
Eiteljorg Museum to Present "Native American Portrayals in Comics"

Step aside, Superman. The Eiteljorg Museum in Indianapolis is hosting a one-day program on "Native American Portrayals in Comics." From Turok to Tribal Force, CHIEF WAHOO to SCALPED, the spotlight will shine on seven decades of Indians in the funny pages.

To be held March 10 from 10 am to 4 pm, "Native American Portrayals in Comics" will center on a series of panel discussions. A sterling lineup of panelists will: 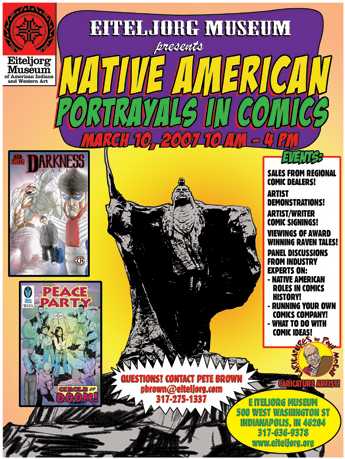 Ought to be a great discussion. Will repost on the NV blog as well..

Yes, it should be interesting. I'll probably write a trip report for you and everyone.