Washing the blood away 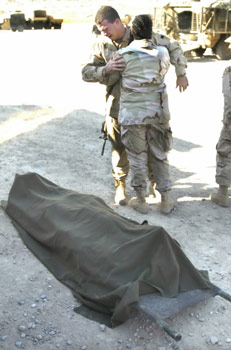 Writerfella here --
Of course, it works. Back in the Viet Nam Era, when this nation's public support for that war disintegrated, the returning soldiers were held to blame more than government, though those men truly had little control whether they had to go or not. Only Native Americans continued to honor their returning soldiers with feasting and singing and dancing and other such warrior honors. Whether others on this website will agree or not, there is an undercurrent of appreciation for the Native American past of this land and that, combined with the sense also of having defended the land itself with their lives, leads to the very vindication that the ceremonies bring. Why no one, even writerfella, did not think of this heretofore is difficult to explain, though writerfella in the mid-1970s did offer a pageant play to the local American Indian Expo held here every August. Basically an historical overview of warriorhood in the New World, its climax identified that Native Americans were the only ones still honoring their Viet Nam returnees. The Expo Board listened to writerfella's pitch and presentation, discussed it at length, but ended up voting against it. Why? They feared upsetting and alienating their white tourist audiences, despite the fact that there were no stereotypes or fictions contained in the proposed pageant presentation. It left writerfella with the realization that truth always is an elusive quality/quantity, even among Native Americans...
All Best
RussBates
'writerfella'

Some quotes from Indians as Warriors:

This information is so valuable, this is the weapon—it's not guns or rocks, it's information. It empowers us.