Mayan life was kind of a drag 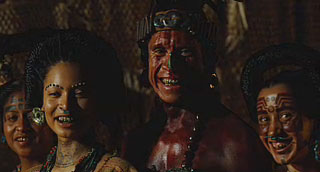 Writerfella here --
The article answers folksily but a little artlessly. The original Native tobacco extremely was powerful, almost to the point of being an hallucinogenic. After being taken to Europe and Africa and finally Asia, tobacco was closely cultivated, hybridized, and otherwise genetically altered until it no longer resembled the smallish handsized plant it once had been. And it came to lose its soporific powers to the point that its main effect only was as a nicotinic depressant.
writerfella remembers the Smothers Brothers' tobacco skit: Dick: ...and consider this, the Native Americans almost completely lost their ways of life as well as their land to our white ancestors.
Tommy: Still, they got even!
Dick: Even? What do you mean?
Tommy: Tobacco! They knew what they were doing! 'Here, white man, smoke this peace pipe! It has tobacco in it. Rot your lungs!'
All Best
Russ Bates
'writerfella'

I guess pre-Columbian Indians didn't smoke tobacco often enough to get cancer. Or did they?

Writerfella here --
From most of what writerfella knows, tobacco ordinarily was not used much for simple recreational purposes, despite EuroMan's reports to the contrary. It was medicinally employed, used in many ceremonial applications, and even used to seek spiritual dreams and information. Certainly the modern tobacco's connection to carcinogenic diseases seems not to have had a reflection in its original form and original usages. Ceremonial tobacco used today by Native healers comes from an ancient species still grown in Central America, not from North Carolina or Liggett & Meyers...
All Best
Russ Bates
'writerfella'