I'm sure the Hopi didn't like the errors, but what really set them off was the portrayal of the blasphemy. It doesn't matter if Dixon was doing this to suggest how bad the bad guys were. He's still guilty of offending the Hopi by violating their religious tenets.

If you're smart, you don't show Muhammad wielding a terrorist bomb as social commentary. You also don't reveal the secrets of an Indian religion for the sake of mass entertainment. 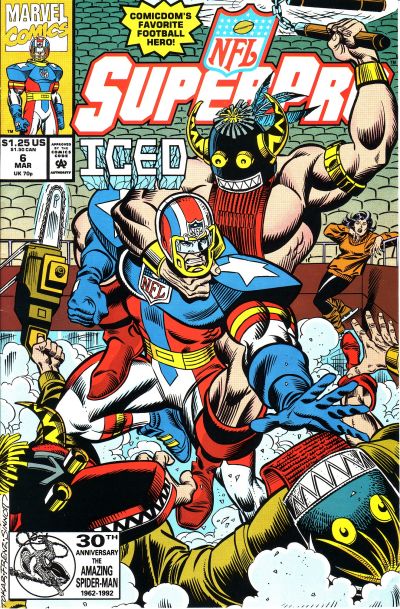 Writerfella here --
The brief mentions of the ostensibly offensive SuperPro Comic do not truly reveal just what transpired. Did the Hopis initiate or even threaten a lawsuit? Was there an actual recall of the issue? Was there some sort of act of contrition involved or is it merely mentioned as either an ironic or humorous (or both) sidelight to comic history?
In any case, there were no 'secrets of an Indian religion' revealed because such secrets never were revealed to non-Hopis in the first place. Just as writerfella never would tell what is in the Ten Grandmother medicine bundles of the Kiowans, and certainly no one ever would learn what is in writerfella's Spider Clan medicine bundle. Oh, one could ask, but if writerfella told you, he'd have to kill you AND himself!
All Best
Russ Bates
'writerfella'

I can see this guy, Buzz Dixon, fancies himself as a "rebel" with being banned by just about everyone. In reality, I don't think he's a rebel at all, just a very bad writer.

Have you read NFL SUPERPRO #6, Russ? If not, how would you know whether it reveals Hopi secrets? Remember your dictum about not commenting on things you don't know personally.

Initially, Marvel said it wouldn't recall the issue. It may have recalled the issue eventually...but only after it had been on the stands for several weeks and the next issue was due. Which isn't much of a recall, if it even happened.

The Hopis protested the comic vociferously. They also closed their religious ceremonies to non-Indians around that time. I believe some people claimed that was a response to the comic, but that seems a little far-fetched.

Writerfella here --
That is the function of the word 'ostensibly', as writerfella obviously never had encountered such a comic book back in 1992 nor since. If understands what word usage delineates, then one knows that one single word can act both as the definer and arbiter, therefore. As writer and writerfella, he knows the value and impetus granted by words or by the combinations thereof. Examine writerfella's post and realize that what he mainly expressed were questions. And why would any sane and erudite person ask questions? The answer to that then tells the whole story...
All Best
Russ Bates
'writerfella'

I encourage people to ask questions, Russ. And I answered your questions as best I could.

But the statement, "In any case, there were no 'secrets of an Indian religion' revealed because such secrets never were revealed to non-Hopis in the first place," is absolute, not conditional. That's the part of your post I'm questioning.

The "secret" would be that kachinas are actually people wearing outfits. Hopi children are not told this until they reach puberty. It is much different than the truth about Santa Claus, for instance. Hopi's have resisted western influence more than most tribes because they take it seriously.

Yes, I know the "secret." I didn't explain it in detail because, well, it's a secret.

Yes, It Was The Worst Comic Ever!! It Was Hard To Swallow The Fact That It Attacked The Hopi! They Had Nothing To Do With It It's "Portrayal" In The Comic Book! It Is Very Sad To Think That Nothing In "Indian religion" is Secret. As For The Katsina Situation Its Not Just Masks And Costumes, Its Like The Pope's Cloths Or The Kings Hat, Or Its Like Bathing In Holy Water! And Also You Must Think Of What You Believe In! Why Do You Believe In The First Place? I Don’t Understand Why Cant People Make The Connection That Maybe We Believe In Things For Same reasons you Believe in Things.