Multicultural Day is approaching in Springfield, and Lisa Simpson has to write a report about her ancestors. Only problem is, they're boring.

Bart is playing with a Land O' Lakes butter carton--creating a flap to reveal the Indian woman's breasts. Lisa reacts, "Native Americans are a proud people with a noble heritage." Then she has an epiphany: "A noble heritage that anyone can claim."

On her laptop she types that her distant ancestor was--she spots a nearby Hitachi microwave--a member of the Hitachee tribe. (Good choice since "Hitachee" does sound like a Southeastern Indian word.)

She has a pang of conscience. "Is it wrong for me to appropriate the garb of a long-suffering people?" she asks herself. Her conscience answers that it's more important for her to get into Wellesley. Having decided, she says, "I'll just need to find traditional garb."

At the school assembly, Lisa has painted her face red and fashioned her kitchen's corn-cob curtains into a dress. She gives the best presentation and Principal Skinner praises her. "Why did I have to lie about my heritage?" she moans to herself. "By speaking with forked tongue, I am in heap big trouble!

"And now I'm thinking in stereotypes? That's even worse!" She runs off and Skinner muses that her shrieking is the war cry of her tribe.

Now adding a pearl headband with feather to her "traditional garb," Lisa has to speak at a city-wide meeting. There she claims the Hitachee invented women's lacrosse, soft luggage, and the sidestep where two people try to get around each other. They have seven words for this movement, she adds.

John Squawking Bear, an Indian reporter for the Chippewa Bugle, is there to hear her speak. He says he's never heard of the Hitachee. Lisa makes an excuse and ducks out.

But now she has to speak at the National Tribal Council in Capital City. Accompanied by ominous war drum-style music, Indians file into the convention center. In her speech, she finally confesses she's not an Indian. At the end, several people in the audience admit they're not real Indians either. The fakers include someone with a great tan and a midget standing atop another midget.

Despite its title, this episode is primarily about Bart's road trip. But the Indian subplot is one of the longest ones in Simpsons history.

Other episodes with Indian themes include The Bart of War and Margical History Tour.

Little Big Girl is a good example of employing humor about Indians without making fun of the Indians. I could complain about a few things: the name "Squawking Bear," the flaming arrow, the idea that Indians would take a white girl wearing a headband from a tribe they'd never heard of seriously. But the show deserves credit for showing an Indian as a journalist and Indians attending a political convention. Overall it was an effective look at modern-day Indians and the wannabe issue.

Incidentally, if you think the Land O' Lakes bit is childish, you're right. But things like this do happen. In fact, I saw grown (30-ish) men playing this very game at the LA Times in the mid-1980s. These were highly intelligent white-collar programmers who were responsible for the newspaper's news editing system. If a woman or minority had seen them, it easily could've resulted in a "hostile workplace" lawsuit. 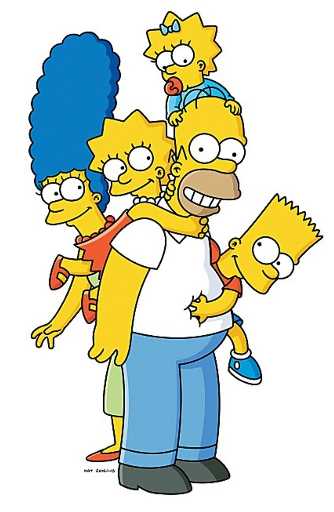