I happened to watch this show. Yes, it was pretty good. Irene Bedard got 15 minutes and two young Native starlets, Shauna and Shannon Baker, got another 15 minutes. It must be the most air-time Natives have gotten on a major talk show in a long time.

Bedard made many of the usual points about Hollywood's portrayal of Indians. These aren't news to readers of Newspaper Rock, but they may have been to Tyra's viewers. Among them:

(All quotations are approximate.)

Carmen Van Kerckhove raises a good point about the Indian princess issue. Tyra didn't press Bedard on it, but Bedard might have defended herself as follows:


On the other hand, it's still a movie where the Native woman served primarily as a romantic object. More to the point, the alleged romance never happened. Pocahontas was a child of 10-12, not a nubile young woman. The 27-year-old John Smith wouldn't have fallen in love with a pre-pubescent girl young enough to be his daughter.

It's a close call, but I can understand why Bedard chose to take the role. Disney's version of Pocahontas was arguably more positive than negative. Bedard may have fought to make her a better character than she was on the page. 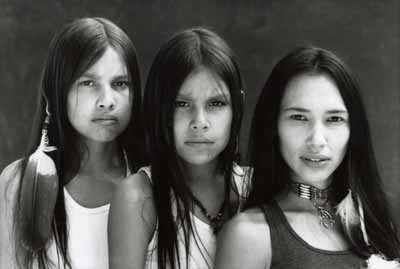 Great write-up Rob! :) Thanks for addressing these issues, and responding to my question about Bedard taking on the Pocahontas role.

I saw most of the show with Irene Bedard, unfortunately I had an appointment and had to leave in the middle of it. What little I did see was very disappointing. I felt Ms. Bedard missed an opportunity to give voice on some important and hard-hitting issues for Indians. It seemed like, too much fluff and not enough substance.

The Tyra Banks Show is all about fluff. Even when the subject is racism, the point is how she and her fellow celebrities have suffered as much as regular folks.

I suspect Bedard hit as hard as she could. They probably went over the questions in advance and smoothed out any rough edges. Bedard knew she had a rare opportunity before a national audience and didn't want to blow it. Going political like Michael Moore at the Oscars would've only alienated people.

Anyway, I wouldn't expect anything more serious from Tyra in the future. In fact, I doubt she's capable of more depth. I think this is about it for hard-hitting exposés on her show.

If Tyra really wanted to dig deep, she could explore the role of super-models in general and shows like America's Next Top Model in particular in promoting unattainable standards of beauty. Don't expect to see that show anytime soon.

Look at all the gorgeous young people who star on almost every network TV show. I wonder how many of them are former models. These are the people who are getting acting jobs instead of Margaret Cho and Irene Bedard.

You have to search far and wide for a show that features regular-looking people. Who's responsible for this cult of perfection, Tyra? Could it be...you? What have you done about it besides profit from it...anything?

"You have to search far and wide for a show that features regular-looking people."

They do happen. Remember the Drew Carey Show? Drew, Kathy Kinney, and even Ryan Stiles certainly did not fit the ideal of "gorgeous young people". This show actually lasted 8 years.

"Lost", a current hit, has its share of "gorgeous young people", but what you call fan-favorite Hurley? Or even Locke, for that matter?

I don't watch "My Name is Earl", but from what little I know about it, the cast is not entirely full of supermodel-perfect actors and actresses.

Drew Carey is off the air, as is Ray Romano. The lead females in both these shows were lovely. Earl's ex-wife Joy is a babe, as is the maid Catalina. On Lost, Hurley and Locke are the exceptions that prove the rule.

As I said, you have to search for shows that have more than one or two token "regular people." In real life the ratio of average-looking to beautiful people is probably 10 to 1. On TV it's the opposite.

I agree that the Tyra Banks Show is mostly fluff, However I am glad to see Irene on her show because Irene is the real deal. I know her. She lives in my town. I had the pleasure of being around when she was not only pregnant with her first but also the first year of her and her husbands band & album. She is one of the most gracious and generous people I have ever had the pleasure to meet. From the beginning of her career if not before she has been active beyond most celebrity in Native Affairs. She should be credited for doing the show even if only for 15 minutes because she brings awareness to a different audience that she usually gravitates to.
Now as far as Robs comment about "regular looking people" Thats a little selfish or bigoted if people are people, then the models and actors who happen to be good-looking to one may not be the ones who are good-looking to another. I know a lot of people I find beautiful are not celebs. Plus since we all coexist what is the definition of regular? Seems to me everyone is funny-looking in their own way.