Another critic writes about Tonto and Black Bart, the characters introduced in #2:Let’s be more specific than this critic was. Tonto kills and apparently scalps the criminals who ambushed John Reid. While they undoubtedly deserved punishment, Tonto didn’t know anything about their conflict with the lawmen. He assumed they were evil and slaughtered them for it.

To reiterate, Tonto wasn’t acting in self-defense. He killed the villains in cold blood. This is called murder, people.

So Tonto has become a stoic, savage warrior a la Turok or Scout. In other words, a stereotype. Congratulations, Dynamite Comics, for returning us to the thrilling days of yeasteryear: the racist 1950s.

Meanwhile, Black Bart is a black man who apparently skins people alive if they cross him. In other words, both the minority characters are cutthroat murderers. So much for diversity in comics, eh? 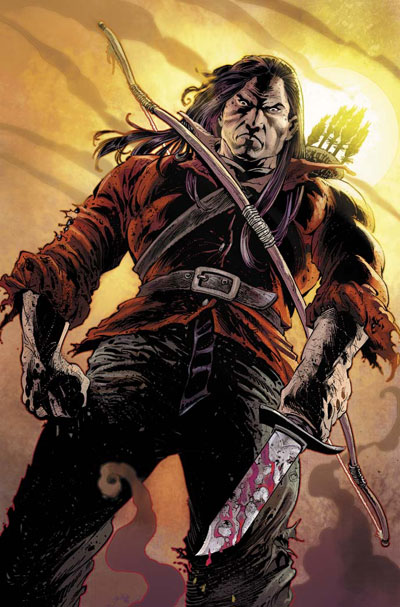 hi rob
first i bought this comic and i must say that i was taken back buy the tonto thing i guess you cant really tell what people are going to do with a character.To me tonto should be pissed off to say the lest the whites have taken everything you own.Angry ya he looks angry alright thing about it I REALLY HOPE WE SEE THIS CHARACTER DEVELOP AND BECOME THE LOVING CARING PERSON THAT INDIANS ARE

I don't think a Indian character has to be loving or caring. Or servile and obsequious, as the original Tonto was. And I agree that Tonto has every right to be angry--that this is a legitimate take on the character.

What I don't agree with is that he has to be a stoic, savage scalphunter. There are ways to express one's anger besides killing people. Being mad is not synonymous with being violent.

Look at medical characters like Becker or House on TV. They're angry even though they heal people. Or heroes like Batman and Wolverine in the comics. They're dark and sometimes vicious, but you never doubt their hearts are in the right place.

Writerfella here --
What everyone has forgotten is that Tonto's best and most-remembered line is, "What do you mean 'we', white man?"
All Best
Russ Bates
'writerfella'