A hypocritical stance by tribesComment:  This letter writer presumes that all Native people do and should think alike. That's his first mistake.

Natives don't hold that every inch of Nature is equally sacred. The San Francisco Peaks are a specific sacred site.

Some tribes may hold the Grand Canyon sacred, but it's more likely to be the bottom (where they supposedly emerged from) than the rim. And if the Hualapai don't consider the rim sacred, that's their right.

Of course, the Hualapai tribe seems to be split on the Skywalk. Which would indicate that some Hualapai consider the canyon rim sacred and some don't. Indians that disagree with each other: what a concept. 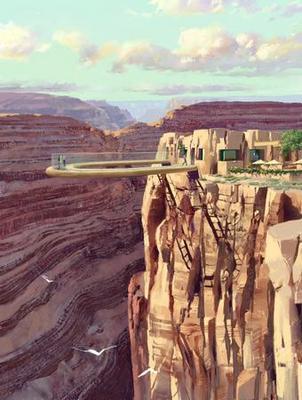 NOTE: writerfella sez, the $74.95 is made up of the original $49.95 Grand Canyon West admission charge and $25 to visit the Skywalk for 15 minutes. The $49.95 price includes transport, a buffet lunch, and admission to the small number of other attractions onsite. The guest rooms only can be reserved with a package deal.
Sounds interesting, but it's too rich for writerfella's blood. It also sounds overripe for vandals or saboteurs or even eco-terrorists to pass up. Watch and $ee, what profit$ may exi$t will get eaten by infra$tructure maintenance, in$urance co$t$, further Grand Canyon We$t development$, and increa$e$ in $alarie$, with maybe a dollar-$2.98 going to the people. Whatever happens, the people themselves never will be able to afford to visit their own Skywalk...
All Best
Russ Bates
'writerfella'