Lakotah plan civil disobedience fishing near Rapid CityComment:  Well, well. I guess Russell Means isn't just talk after all. He's moving from the "yell at bystanders through a megaphone" phase to the "get arrested as a publicity stunt" phase.

For more on the subject, see The Republic of Lakotah. 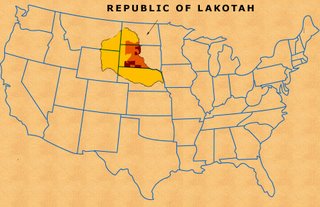