Indians in King of the Hill

As I wrote back in Indian Comics Irregular #119, John Redcorn of King of the Hill is perhaps the best Native character on TV. In ICI #127, I mentioned a couple of episodes featuring him: Redcorn Gambles With His Future (Apr. 2005) and The Arrowhead (Oct. 1997). Here are some other significant Redcorn episodes (with plot summaries from TV.com):

Peggy’s Headache (October 1998)Nancy Boys (April 2000)Problems with this episode: Redcorn turns to Dale Gribble for advice on getting his tribe federally recognized. In reality, Redcorn would have little trouble finding a real lawyer to take his case. And the whole tribe would be involved, not just Redcorn.

Dale’s approach, such as it is, is to use the Freedom of Information Act to uncover information. In reality, tribes seeking recognition must extensively document their history using the data at hand. Petitions for recognition seldom if ever turn on facts the government has but the tribe doesn’t.

Spin the Choice (November 2000)Problems: The cannibalism identified at a few Anasazi sites is controversial. It could’ve been part of a religious ceremony, or it could’ve occurred in a time of extreme hardship. There’s no proof it was a fundamental part of the Anasazi culture rather than a freakish exception.

More to the point, the Anasazi lived in the Four Corners area (Arizona, New Mexico, Utah, and Colorado). Redcorn could be descended from them only if his unspecified tribe is Ysleta del Sur (Tigua), a Pueblo tribe that migrated to southwestern Texas. Most of the state’s tribes aren’t related to the Anasazi.

Even if Redcorn’s tribe is related to the Anasazi (doubtful) and the Anasazi practiced cannibalism (questionable), Bobby talked as if all Indians practiced cannibalism. This perpetuates the fallacy that all tribes were and are the same rather than distinct cultural entities. It’s okay to portray the other characters as ignorant, but as someone who supposedly just read about Indians, Bobby should know better.

I'm not sure which Texas tribes practiced vision questions. I think the Comanches did but the Tiguas didn't. Depending on which tribe Redcorn is supposed to belong to, the vision quest may be a stereotype rather than a genuine cultural practice. Chiefs and vision quests (along with tipis and peace pipes) are common Indian stereotypes, of course.

Incidentally, in The Best (Only) Native Character, I said Redcorn was the only Native character on TV (at the time). A correspondent asked me if I should’ve counted Redcorn’s son Joseph as a second Indian character. Short answer: No. For the reason why, see my explanation. 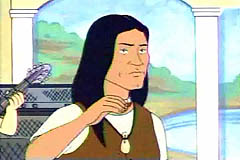