In Comments on (Mis)casting Depp as Tonto, I posted Misatim's response to Indian Comics Irregular #176. But I let her criticism of my position go without a reply. As regular readers know, that usually doesn't happen.

Nor did it happen in this case. Here's how I responded to Misatim:

>> Sorry Rob, He does look Indian, just not the stereotype. <<

I'd say he looks much more like a Caucasian than one of the hundreds or thousands of Indians I know.

Yes, right. I've been arguing against the stereotypical look of the full-blooded Indian for almost 20 years now, you know.

>> Just like not all Caucasians are Blue eye and Blond hair, either do we <<

Yes, I understood that back in 1990 or thereabouts, when I started on this path. Here's one of perhaps hundreds of postings I could find on the subject:

"RACE: Are We So Different?" 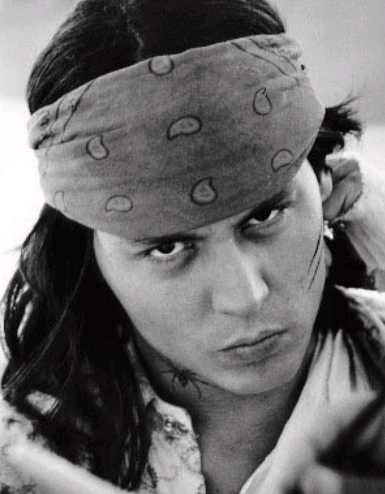 You saying that Johnny Depp doesn't LOOK Indian (Native American, to those that know such things), does not change the fact that he has a significant number of Native American ancestors. His beloved Grandfather taught him much about his heritage, a fact that you also apparently have overlooked.
It's a real shame when a person opens their mouth about something that they don't understand. Just supposing isn't much of a source for accurate statements.

I mean... if he wants marry me I'll adopt him into my tribe no problem!! HOOOOOTTTTIEEE. But seriously, the mere fact that he's being a part of dredging up this antiquated stereotypical, just-a-sidekick-to-the-handsome-white-guy character to me says he doesn't know much or care deeply about his heritage.

I searched the Net for information on Depp's background before my first posting on the subject. What I found is there. I didn't find anything about a "beloved grandfather."

Therefore...yes, I must've overlooked all the information about Depp's Native background. Why don't you cite and quote this information from a reliable source? Then we can see exactly how Native Depp is.

"I'd say he looks much more like a Caucasian than one of the hundreds or thousands of Indians I know."

Don't you live out west and associate mostly with full-blood Navajos and other full blood western tribes? How many Eastern Cherokees (fullblood, or otherwise) do you know? To say that this man (Depp) doesn't look Cherokee is not very well thought out. Mixed-blooded yes, but NDN features are quite prominent nonetheless.

Most reports say Depp's maternal great-grandmother, Minnie, was a full-blooded Cherokee. I haven't seen any reports about a "beloved grandfather."

So Depp has one known Native ancestor at the great-grandparent level. If you consider one a "significant number," so be it.

I live in Los Angeles, so I see mainly California Indians in person. But I also see many Indians from elsewhere on trips and at conventions. As well as in the media and on the Net, of course.

Since Tonto is supposedly a full-blooded Apache, the real question is whether Depp looks like such a person. And not whether he looks like a 1/8th or whatever Eastern Cherokee. A Southwestern Indian with Athabascan (Navajo or Apache) features would be an excellent choice to play Tonto.

bla,bla,bla who would you sugest to play the part other than johnny depp, he's the best for the job,he has respect for people and im sure there cultures, acting skills,and striking indian or non indion looks. To me a damn good looking ACTOR who is more then qualified and suitable for the job. not that im an expert and slightly bias.

That you think Depp is a cutie-pie is exactly the reason not to cast him as Tonto, Lesley. It sets up false expectations for every other Native actor in the future. "Get me a good-looking 'Indian' like Johnny Depp," casting directors will say, which will exclude every actor who doesn't look 7/8 (or whatever) Caucasian.

I don't know what age range the producers considered for the Tonto role, and I don't have any favorites, so it's pointless for me to suggest anyone. There are hundreds of Native actors in their 20s, 30s, and 40s who could play the role successfully. And don't bother saying Depp is famous and they're not. I've already discussed the fallacy of the big-name actor.

Kinda harsh on people aren't you?? Lol, anyway, I understand what you're saying about Depp not fulifilling the role as an
apache because he doesn't look like one. However, he does indeed look part Native. I go to school at UW Madison and we have all manner of Indians (who actually prefer the word "Native," hate stereotypes, and false-claims to Native heritage, i.e. "my great-grandmother was an Indian Princess," and they also think that most people, especially Blacks always try to claim "cherokee" heritage {although I've tried to educate them that when Cherokees attempted to "civilize/accomadate/imitate" whites they did indeed initiate slavery of Blacks as well})who know almost everything about their heritage, attend pow wows, have Native orgs on campus and even sororities. They look like everything from white to asian to stereotypical american film Indians. So I don't agree that he doesn't look Native...I am part Quapaw Indian as I've found out through my part Native, part Black and irish grandmother but i just look biracial/Latina. But I do like your blog as I come across it in my google searches time to time...I also blog on race but I blog on the African diaspora.

Oh and my last name is "Machicote" which as I understand is the french word for certain indian skirts..I forgot which tribe...which is interesting as my father is Puerto Rican...

The question is whether Depp looks like a full-blooded Texas Indian--i.e., an Apache or a Comanche. And not whether he looks like a Kentucky white boy with a little Eastern Cherokee blood. I say he doesn't.

im part native american and black my tribe is sioux i grew up on the res...but yeah i think johnny depp can play a native american because i have cousin who are full blood natives...and their whiter then johnny depp native american that i seen going by my tribe then can go from dark to white and some times asian looking it can depend on other tribes though

I'm half native american and half white and just now getting into my native heritage at 36! Who is to say what Johnny Depp does or does not know about his native american background.Have you personally asked him?!By the way!He has played a native american before and he has an indian tatoo on his arm to honor his heritgae.So there u go..As far as his dark looks,I think he looks native american to me.He will make a fine Tonto:)

people tell me I look like Johnny Depp, I'm from Norway so no Native Americans here.

If it was that clearcut that johnny depp was clearly one thing or another we wouldn't be having this debate. He obviously look indian with a bit caucasian. Alot of latin american look like that. I'm Irish and a few years ago when Johnny Depp was less known the same subject came up. When one of my friends was asked if johnny depp could look Irish his reply was "not a chance... he looks like a mexican or something". I think that says it all. I think we see in movies so much you can get confused. But he would be very dark for a european