Chiefs were humble and generous

Urbana art spotlights Chief controversyArtist's StatementComment:  These postings point out yet another reason to disdain Chief Illiniwek and other chief mascots and stereotypes. According to Heap of Birds, a typical tribal chief wasn't necessarily the biggest, baddest hunter or warrior. He was more like a pastor than a CEO, president, or general. Therefore, we shouldn't celebrate Indian chiefs for how tough and macho they were. We should celebrate them for how humble, wise, and generous they were.

But this doesn't play into America's founding myths, of course. According to these myths, it was our generals vs. their chiefs. We fought them in a more-or-less equal match-up of military men. They were tough as nails, but we were tougher, so they lost and forfeited their lands. Now we enshrine them for their toughness to prove how great we were.

This mythology falls apart if you realize a chief was more of a shepherd than a king. "We defeated some Indian who gave away his possessions? What was he...a Commie pinko? Real men don't give things away; they take things. They amass wealth and power. Why in the world are we commemorating this loser?"

Below:  "Just like a real chief, I urge you to root for victory, buy more merchandise, and donate money to the university." 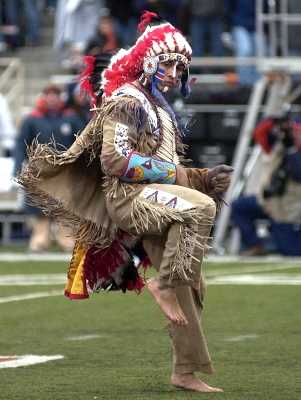 I tend to try to refer to cheifs as "leaders" in discussion rather than "cheifs". I think it deflects the strong image of "Indian Chief" somewhat. But I still of course use Chief when it is an actual title.

(and as seen above, I can still misspell it sometimes, too)

Nowadays, tribes may have a president or chairperson rather than a chief or sachem. Therefore, it's wise to avoid the term "chief" unless you know the person is an actual chief.