Column:  Play's 'authentic' Indians offensiveAnd:This anecdote is revealing. Adults (think they) can discern between real and fictional Indians. Maybe so, but children can't. They absorb what they learn from the media--media such as Peter Pan. The message they get is that "real" Indians are chief and braves in "feathers and leathers." And that real Indians--i.e., doctors, lawyers, middle managers--are fakes.

Finally:Actually, the recent live-action Peter Pan movie did a decent job of making the Indians nonstereotypical and "real." If you buy the idea of Indians consorting with pirates and fairies on a magical island, you probably can't do much better than this.

But as I've said before, the whole idea of placing Indians in a fantasy Neverland is problematical. Therefore, I agree with this writer. Replace the Indians with a fictional race--elves or Munchkins or whatever--and the story would work just as well.

For more on the subject, see Tiger Lily in Peter Pan:  An Allegory of Anglo-Indian Relations.

Below:  A more authentic Tiger Lily from the recent Peter Pan movie. 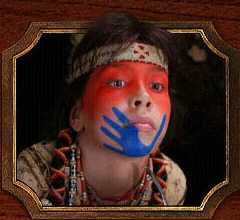