No bottom line for Native movies?

In Natives on Non-Native Casting, someone named Jet posted some provocative comments. Here are Jet's thoughts and my responses:It's a fallacy to think people want to see only those in their own "demographic." We can come up with a long list of people and "products" that have crossed over into other demographics: Roots, Bill Cosby and The Cosby Show, Michael Jordan and Tiger Woods, Denzel Washington and Will Smith, Bruce Lee and Jackie Chan, Japanese manga and anime, Julio Iglesias and Ricky Martin, Jennifer Lopez and Shakira, Ugly Betty, etc. Not to mention the whole field of music: jazz, R&B, soul, rap, hip hop, etc.

Nor does your formulation explain the success of movies such as My Big Fat Greek Wedding (appeals only to Greeks?), The Blair Witch Project (no budget or stars), Slumdog Millionaire (even fewer Indian Americans than American Indians), or Fireproof (Christian box-office hit starring Kirk Cameron). Fact is, movies of any "demographic" can do well if they're well-made and well-supported. That includes Native-themed movies.

While major studios are looking for the next Star Wars or Titanic, here's how the market for "niche" movies is doing:

Fallacy of the big-name actorSo studios look at actors with gross returns or followings or recognizable names? Sounds to me like a rationalization for choosing whomever they want. "Such-and-such has no talent and has never produced great returns, but he or she has a following. Everyone knows his or her name." Hence the box-office bombs featuring noted thespians Jessica Simpson and Paris Hilton.

In The Lone Ranger (and Tonto), the title characters have the recognizable names. If this movie starred Toby Maguire or Elijah Wood and an equally unknown Native actor, it would have as much name recognition as the Spider-Man and Lord of the Rings franchises had. Fact is, with a big-name studio and director behind it, The Lone Ranger will sell itself no matter who plays the roles.

You could go down the line of comic book-style movies and disprove the need for a "big-name" actor. Brandon Routh as Superman. Christian Bale as Batman. Robert Downey Jr. as Iron Man. The ensemble casts of the X-Men movies. Gerard Butler as King Leonidas in 300. Box-office success simply doesn't require a movie star with past box-office success, a following, or name recognition.

In short, you think the studios are willing to produce movies starring minorities but the investors are too racist to fund them? Given everything I've read and written on the myopia of Hollywood studios, I doubt it's that cut and dried. I doubt investors are much more prejudiced than studio execs are.

For more on the subject of how multiculturalism sells, see Reality Shows Reflect Reality. 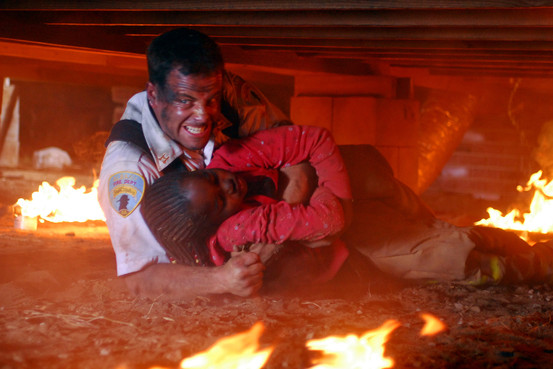 Rob,
Thanks for the replies. Ilove the blog.
I am in your camp completely, but I will tell you in my experience, the first thing I get asked when I pitch is "who is attached?"
Yes, Hollywood COULD cast anyone they wanted, but THEY DON'T WANT TO WORK AT MARKETING...it IS easier to sell Johnny Dep than an unkown. That is why hey want to produce films from best-selling books (ever notice how few "original" ideas make it through the Hollywood system...graphic novels, remakes...sequels...)
They don't want the heavy lifting and the more "A" listers they can market the more they equate that with sales. I was asked the other day to rewrite a Native woman role to a white character because there where no "B" actresses who are native that would fit that role. I don't agree with the system, just reporting my experience. You and I can complain about how "Whale Rider" did etc...but try getting financing with that argument.
They want recognizable faces on the DVD box.
I am in the trenches trying hard to get a decent Native-themed film produced. I wish it were different, but it's not.
Keep the faith, Rob,
Jet