Means and Studi in eco-thriller

Means and Studi to Star in Terra InfirmaComment:  Chingachgook and Magua...together again. For the first time since Last of the Mohicans? It would be great to see these two actors butt heads or chew the scenery together.

Is it just my imagination, or does Means say that all his movie roles are the first or best of something?

"Full functioning participants in the American way of life who continue to be in rhythm with their culture"? Try Pow Wow Highway, Thunderheart, Smoke Signals, Grand Avenue, The Business of Fancydancing, Christmas in the Clouds, Dreamkeeper, or any Hillerman movie. If that doesn't impress you, I can name several more. 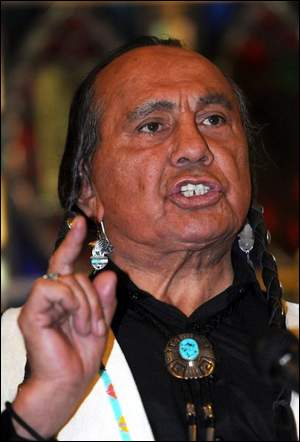 "Is it just my imagination, or does Means say that all his movie roles are the first or best of something?"

Means has a type of self-promoting arrogance/swagger/etc that is not uncommon among political figures, boxers (think Muhammad Ali), actors, and rap stars.

And he is two of those four anyway. This is not necessarily a criticism.

Means is a complete joke, somebody needs to make a 'greatest hits' collection of his crazy nonsense, some samples.

"They do not treat white people like that." (Means claiming that ward chuchill was 'discriminated' against.)

“Now they have found a house servant by the name of Obama.” Russ believes that Jews rule the world not to mention he believes the myth of the 'palestinian' people. This sums up how he views Jews:

“Our grandmother the Mother Earth is tired of the human race. She is going to eliminate it and I champion her, Mother earth.” He believes in nuzzing lebowski!

“Americans don’t even know their own history." Thanks for telling us what every single American thinks Russ! Because lord knows if anyone's qualified to lecture people it's a ranting jackass who thinks that a bunch of guys Yossi and Avraim rule the world. *Clicks sarcasm off.*

Means played a boxing coach in Black Cloud, DMarks. Does that count?

I see you don't understand Means's generalizations any better than you understand mine, Stephen. To help you with your English, see Educating Stephen About Generalizations.

P.S. The sign in your image may have been a penal comment on OJ "Juice" Simpson. Or a dietary comment on the sugared juice consumed by Americans. ;-)

"I see you don't understand Means's generalizations any better than you understand mine, Stephen. To help you with your English, see Educating Stephen About Generalizations."

Oh I understand generalizations however what Means is spouting just so happens to be bigoted nonsense.