Why Sheyahshe wrote his book

A deeper look at comic booksComment:  For more on the subject, see Comic Books Featuring Indians. 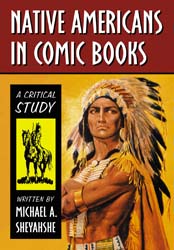