I recently read the sci-fi classic Friday. Here's the story:

FridayOne scene in this novel is worth mentioning.

The story is set in the mid-21st century. Friday, going by the name Marjorie, has joined a free-love sort of family in New Zealand. Since they're uninhibited about sexuality, Friday doesn't expect them to have other hangups.

The family includes Anita, who's in charge; Vickie; and Anita's daughter Ellen. Ellen has done something disgraceful and Marj (Friday) asks Vickie what she did:Without spoiling the story, let's say Friday doesn't agree with this irrational racism and pays for it.

It's not clear why Friday told the family she was Cherokee if she didn't think she was. But her boss later confirms that she is part Indian:Rob's reactions

A few thoughts on this:

As for the rest of the book, Heinlein has some interesting ideas about the future, but his view of women is misogynist. Moreover, as two Amazon.com critics put it, "the secret-agent intrigue peters out partway through" and "the main story meanders around pointlessly for over half the book." Rob's rating:  7.5 of 10.

Below:  Friday the brown-skinned Cherokee... 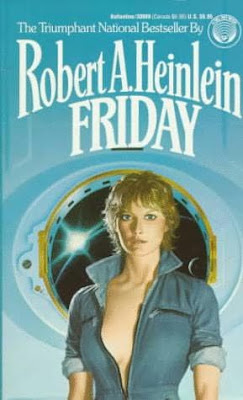 ...and the Tongans she supposedly resembles.