An interesting 10-minute video on white students testifying against Indian mascots in the Wisconsin state legislature:

STATE--Taking a StandComment:  What's interesting is not the Assembly Bill 35. I'm not sure the top-down approach of forcing schools to change their mascots is the best way. Persuading them to change seems better.

Of course, the NCAA ruling against Indian mascots was a kind of force, or at least pressure. Schools had a choice of forgoing their mascots or not appearing in post-season tournaments. This "forced" them to decide what was really important--winning games, not being Indians--and they chose accordingly.

Also not particularly interesting is the substance of the students' position. They didn't come up with anything new or revelatory. It's not an honor to be stereotyped with whoops, warpaint, and tomahawk chops...obviously.

No, what's interesting are the thought processes hinted at in the video. The non-Indian kids apparently didn't know anything about the mascot controversy. They researched the issues. With open minds and no preconceived beliefs, they inevitably came to the right conclusion: that mascots are stupid and stereotypical.

No other position is possible if you look at the issue rationally. That is, if you're not consumed by idol worship of the mascot as a golden calf. Anyone who isn't biased can see that a 19th-century chief or warrior is a blatant stereotype.

One student touches upon the idea of mascot fetishism. She says mascot worshipers basically become "Indians" in their own minds. They don't want to give up their "Indian identity" any more than a real Indian would. Like Crazy Horse or Geronimo being forced onto a reservation, they refuse to give in.

This sounds like a form of mental illness to me. It's an insult to real Indians who actually had to endure forced assimilation. It's certainly not consistent with an educational mission of teaching genuine Indian history and culture. Even if the mascots weren't stereotypical, this would seem like a good reason to abandon them.

Really, the psychiatric community should look into this sickness. Call it Mascot Misidentification Syndrome: the psychotic delusion that wearing feathers and facepaint makes you an Indian. Let's get doctors and drug companies to treat it while entertainers raise awareness of it. With luck, we can help these sick people recover and lead full, productive lives as the non-Indians they really are.

For more on the subject of mascot worship, see Extreme Racism = Mental Illness, Indians Hold Steady at 0.3%, and "Next Dance" Is Educational?! For more on mascots in general, see Team Names and Mascots.

Below:  As Chief Illiniwek is sent to the happy hunting grounds, his "braves" suffer a second Trail of Tears. Oh, the humanity! 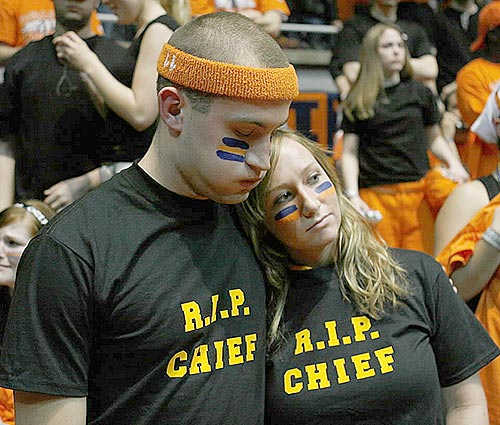