Adrienne Keene blogs about designer teepees for toddlers in her Native Appropriations blog:

Some commenters on this item debated the idea of playing Indian:Comment:  Most of the people reptilegrrl played as a child were either historical or fictional. Indians don't want to be relegated to either category, especially the fictional one.

For more on stereotypical tipis, see The Pee-pee Teepee and Teepees in Koff Beer Ad. 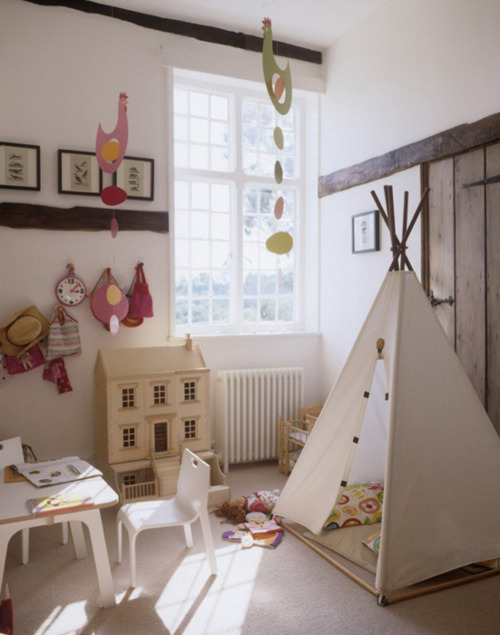 Hi. I wish to point out three things:

One:Debbie attributed to me something I did NOT say. I didn't say anything about kids imagining "what they want to be as adults." I said that I think it's good for kids to imagine being different people and living different kinds of lives.

Two: I *am* an Indian. Acknowledging and exploring the history of Indians does not relegate Indians to mere history. This should be obvious since *I am an Indian woman.*

Three: You said that most of the types of people I mention are either historical or fictional. Try counting again. Most of the people I mentioned imagining as a child were people who exist and live today: farmers, pioneers, astronauts, cowboys, princesses, and Indians. These are neither mere history nor fiction.

Why do you and Debbie feel the need to be dishonest in order to make your point? Your points are perfectly valid without lying and assassinating someone's character.

Debbie Reese suggested your reason for playing "dress up" based on the reason most children do it. Whether she was right or not, it was a reasonable suggestion.

Spare us the sophistry on your third point. All those people exist in history and fiction as well as in modern life. More important, when children dress up, they usually do so as historical or fictional versions of these people.

Let's go through some examples. If I somehow get it wrong, you can tell us how you really dressed up.

Pioneer: Yes, you could've dressed up as a pioneering nuclear physicist or genetic engineer. But most likely you dressed up as a Daniel Boone-style pioneer from American history.

Princess: Yes, you could've dressed up like Princess Diana, Stéphanie, or Masako in designer fashions, but most likely you dressed up in a frilly pink dress and tiara. This outfit is more fictional than historical and more historical than modern.

Indian: Yes, you could've dressed up as a modern Indian woman in a work shirt and jeans or business suit. But most likely you dressed up in a "Pocahontas"-style buckskin dress and feathered headband.

The same applies to a farmer in overalls and a straw hat. That isn't how most farmers dress today. As for cowboys and astronauts, they're a dying breed. Their outfits haven't changed much, but they're more famous for their roles in history and fiction (Western movies, space operas) than their current roles.

Therefore, my point was an honest and valid one. With your implication that you dressed up as modern versions of these people, you're the only one who seems dishonest here. I suggest you try again.