Apocalypto in It's Always Sunny

It's Always Sunny in Philadelphia continues its streak of Native references with the 12th episode of its fourth season. Titled The Gang Gets Extreme: Home Makeover Edition (airdate: 11/13/08), the episode has "the gang" remaking a Latino family and its home.

Mac and Sweet Dee dress up the Juarez family in wigs and leisure wear to make them look "American." Then Mac says:Comment:  If a serious pundit had said this, I'd say it was stereotypical and insulting. But since Mac and his friends are idiots, his comments reflect badly on them, not the Juarezes.

This shows the importance of context in determining the meaning of words. Depending on who's saying it and why, almost anything can become an attack. 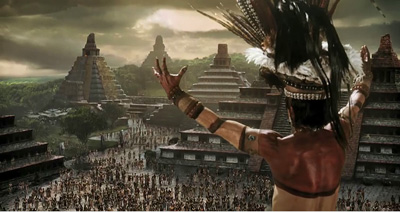 I would of course say such a thing ironically.